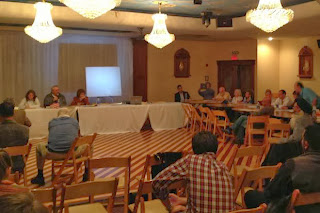 A member of Community Board 9, which represents Kew Gardens, Richmond Hill, Woodhaven and Ozone Park, is facing the boot after allegedly directing anti-Semitic remarks at other board members over the summer.

Sam Esposito, who has represented Ozone Park on the board since 1988, claims the remarks were not anti-Semitic and were only intended as a criticism of three board members — Evelyn Baron, Wallace Bock and Jan Fenster — for complaining about being served inappropriate food during a meeting in June.

The members, according to an email that Esposito sent them after the meeting, said that the food served before the board’s meeting was not “Kosher enough.”

Esposito wrote that the three board members were “acting like little children that did not get their way at the playground calling daddy on the phone complaining."

According to the email, one of the board members called Rabbi Daniel Pollack, also a board member, to complain that they had nothing to eat.

They also blamed CB9's staff members for ordering food that they were not able to eat, according to the email.

“After seeing what I saw at the meeting, if that is what being Jewish is all about, I would rather be atheist because I was raised proper with respect and much different than you three,” he wrote.

After receiving the email, Bock sent a letter to CB9 Chairman James Coccovillo, calling Esposito's email a "vicious anti-Semitic diatribe against the religion which I practice," and asking for his removal. Baron and Fenster also signed the request, which is scheduled to be discussed Tuesday night.

Hold on. I've been to a lot of community board meetings, and none of them had a buffet. So what's up with CB9? Who paid for the food?
Posted by Queens Crapper at 12:06 AM

Let them brown bag it! How childish!
It's no wonder the neighborhoods that CB 9 "represent" are such a mess. Pitiful and lazy.

We paid for the food. Who do you think paid? My philosophy regarding meetings is that only the recording secretary should be sitting down. They could accomplish much more standing up and doing our business. As for feeding them, that's not on my agenda, I have to work to buy food for my family and so should they.

QC - to answer your question.

As you saw with with the Republican Club renovation some weeks back, catering halls are fairly common in the Richmond Hill / Ozone Park area, and a natural location offering space and late hours to accommodate a community board meeting.

The proprietors of many of these halls have small refreshments available, such as pastries, fruit, and hot beverages on buffet, and I believe these are offered on the house. Villa Rustica even contributes serving staff.

Sam is right that the board members are acting childishly, but I don't see what purpose bringing up religion served.


Something isn't Kosher here besides the food issue.


Here is yet another example of pulling the religion card from the deck, when you can't get what you want in an intelligent or orderly manner. They couldn't use the race card, in this case, to make a stink.

This is embarrassing for me and my more enlightened coreligionists.

Anybody verify whether or not CB9 staff ordered the food? If staff ordered it, how was it paid for? If privately paid for, by whom? If the food was a freebie, then who did it come from? Whoever ate it may have unwittingly or wittingly accepted a gratuity beyond acceptable levels allowed by the ethics bd.

CB7 had better make sure that they order some Chinese food for their next fest, or there will be hell to pay!

What does Peter Koo think?

Did you say food fight?
It sounds like Animal House is in re-run.

If you had special dietary needs, why would you ever trust someone else to feed you????

I just dont get it.

I'm Jewish and Episito is right!

What a bunch of ungrateful crybabies!

Shut up and do your job.

No more food to be allowed at CB9 meetings.

Why is the community board feeding its members anyway? I thought they were strictly non compensated. As for Wallace Bock, the whining board member who wants Esposito fired, why not google him or the estate of Huguette Clark, and read all about how he himself was removed as her estate administrator, among his alleged trangressions are using undue influence on this 104 year old lifelong Catholic woman to cause her to pay $$$ millions for security services at Jewish settlements in the occupied West Bank. The chutzpah!

Board 9 is the most dysfunctional board in all of Queens. Their meetings constantly start late and go on until 11 p.m., even midnight, largely due to infighting over procedure, as well as other assorted bickering. Nobody there has a clue how "Robert's Rules of Order" works, nor consideration for those seeking liquor licenses who are forced to waste an entire evening to make their case and get a decision. There's just too much drama there.