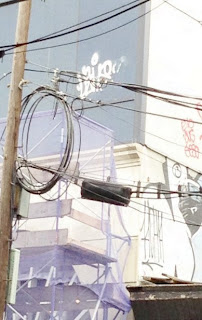 Recently a police report was filed with the 114th Police Precinct by Pali Realty for extensive graffiti damage done to the multimillion dollar medical facility under construction at 23-25 31st St. in Astoria. Graffiti vandals damaged the façade and exterior glass windows. Damage to the building is estimated to cost more than $150,000, causing an unnecessary expense and delays.

“It is a real travesty that damage by graffiti vandals continues to plague our neighborhood. We deserve a neighborhood free from graffiti and vandalism,” said Yianni Konstantinides of Pali Realty, the developer of the property. “Every bit of damage done places burdensome costs for this project and negatively impacts this building and other hard-working small business owners in New York City.”

Pali Realty has invested millions of dollars into the Astoria Medical Facility on 31st Street. Upon completion, it will serve as a full-time medical facility featuring 134 underground parking spaces and offices for 26 physicians with a support staff of approximately 80 people, bringing jobs and medical care to a largely underserved community. The medical office building will be occupied by various medical groups and hospitals. These local medical services and new jobs will be a major benefit to the Astoria Community.

We're supposed to feel bad that the shady developer of the building that bought off all the area legislators, got a variance it didn't deserve, and made neighbors' lives hell, has to shell out money to remove graffiti?
Posted by Queens Crapper at 12:41 AM

Henny: Doctor, it hurts when I do that.

Doctor: Then don't do that!

How long have we been talking about the graffiti problem in Queens. One of the first issues Dan Halloran could not get right! Now the doctors have to pay and its a really big deal. This is a problem that needs to be addressed by our elected "leaders" on an ongoing basis. Big, Big fines and arrests.

And this is right down the block from the Vallones' neighborhood control center! They can't even take care of their own nabe, how are they going to take care of a fiefdom the size of Queens?

My impression: Graffiti is increasing all over the City. Are stores selling spray paint to kids again?

the Gazette has been a Vallone and community board 1 mouthpiece for the past decade.

It had better change as the neighborhood is changing.

Understand the George S of the DKCA had a hand in it.

The vandals are over 21.

A) The developer 'vandalized' their neighbors houses during construction, cracking foundations and ruining homes. If someone wants to tag up this building as payback for what the developer did, I'm fine with that. When elected officials do nothing, the people will get their hands dirty. The neighborhood is not underserved. Mt. Sinai/Astoria General is small but well staffed. We have plenty of doctors around here to choose from, many well established and trusted. Throw a rock and you'll hit a good doctor around here.

B) If the developer is that worried, maybe he should hire a rent a cop to secure it? The building faces the subway - of course it's going to be a prime graffiti target. If kids with spray cans are getting in there, I'm sure there are bigger problems. Are there homeless people sneaking in at night to sleep? Have there been thefts of scrap metal and equipment from the jobsite? Unsecure construction sites attract a lot more than kids with spray cans.

C) I heard on pretty good authority (a police officer) that the city quietly stopped paying out the $500 reward it used to give for leads on arresting vandals. I've also heard cops are giving out DATs instead of putting kids arrested for graffiti 'through the system' - so if they get caught, often they're not spending 24-72 hours in jail like they used to. I haven't confirmed this, but it would certainly explain the uptick in vandalism as of late.

If you think this is bad, I can't imagine what would happen if DiBlasio gets elected. Everyone will be overtaxed, money will be wasted and siphoned off through bureaucratic programs and graffiti will be the least of our problems.

It's no longer graffiti but street art. Go to LIC and see the ridiculous 5pointz building.

Oh how the leftists LOVE this stuff but they won't love it once it appears all over their neighborhood.

Most graffiti and street art purveyors are of the Mexican variety. Dummies who feel the need to see their spray paint doodles where it doesn't belong.

Its more beneficial to take the Gazette to task for failing to report the truth than to switch to another paper.

Sure, Crapper — or do both. The more news sources the better.

The Gazette is not a newspaper. It's a Pennysaver.

If the Gazette is not serving the community then don't serve the paper or its advertisers. Leave it lay. There are many other sources of news today.

We love graffiti? You think so? I hate it.

With Vallone gone, is the community repaying this guy crapping over them by making his investment a living hell?

PS Heavy investor in Gazette advertising - at the same time the community was fighting him.

THAT is the bullet the boro dodged this week.

And yes, Mr. Upzone! / "Millstones are just rocks" / Queens Library Trustee / Community Board 1 honcho / DK Civic Leader / beneficiary of generous funding from Van Bramer and Vallone was, as rumor had it, involved with that paper.

No matter about the evil developer - graffiti is a crime, an eyesore, symbol of decay and lawlessness. The Police Precinct stats should include this type of crimes as there is plenty of it in Astoria and Queens.

graffiti is a crime, an eyesore, symbol of decay and lawlessness.
----
Funny, some can say that about the developers and their building. And when people are denied legitimate venues they have been known to resort to others.
---
Not in favor or encouraging vandalism, but when you deny people their rights stuff happens...