Willets Point: Yes indeed, the fix is in 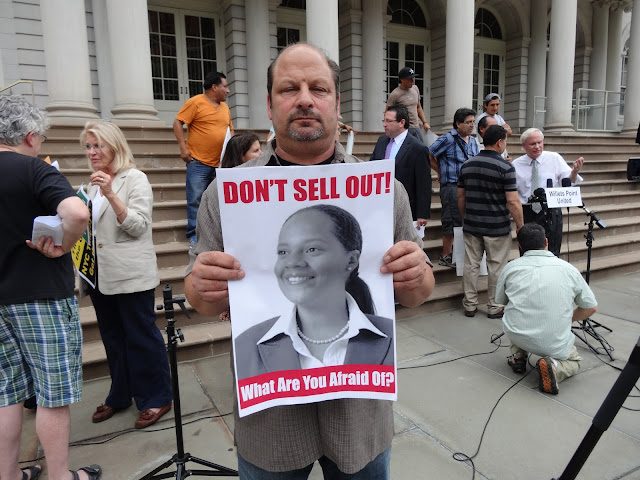 The Chronicle’s report on the Willets Point public hearing held September 3 by the City Council Subcommittee on Zoning and Franchises (“Willets vote delayed; hunger strike ends”; Sept. 5) focused on the tenant businesses’ grave complaint about their eviction without group relocation, but omitted many other newsworthy aspects of the hearing.

At issue was not just relocation, but the application of developers Sterling/Related, which if approved by the Council would result in a 1.4-million-square-foot “Willets West” mall being constructed on Queens parkland, Willets Point property worth $200+ million gifted to Sterling/Related for just $1, an additional $99 million grant of taxpayer funds, no contractual obligation to construct new Van Wyck access ramps, and therefore no clear path to construct any housing — among many abrogations of promises made in 2008.

At the hearing, those opposed to the Sterling/Related application significantly outnumbered those in favor. Testifiers in opposition included the Queens Civic Congress, representing 100+ civic associations; individual community organizations; the Property Rights Foundation of America, whose president traveled from Albany to testify; and New York City Park Advocates, among others. Testifiers said why constructing a mall on parkland is illegal; explained how it doesn’t deliver benefits touted during 2008, or makes them susceptible to contractual escape clauses; summarized the severe, unavoidable traffic impacts; and recounted how the state Attorney General determined that NYCEDC and Claire Shulman’s local development corporation illegally lobbied for approval of the development — and yet the development not only proceeds but is awarded to Sterling, owned by the owners of the Mets: premier financiers of Shulman’s development corporation as it illegally lobbied.

The circumstances of the hearing were also newsworthy. With minimal advance notice, it was scheduled for 9:30 a.m. on the morning after Labor Day, when many people were away. Less than half of the committee members were present for the Willets Point portion of the hearing. Subcommittee Chairman Mark Weprin only allowed each speaker two minutes, and prohibited Willets Point United from showing its PowerPoint presentation — even though people would have ceded their time for it. In our opinion, all this demonstrates the Council’s contempt for public comment about the proposed development.

These latest examples of bias come on top of expanding the development from 62 to 108.9 acres including a mall on parkland, in a private process that shut out the Queens-based Willets Point Advisory Committee from participation, contrary to multiple written promises.

The fix appears to be in; let the Council now show us otherwise.

You folks are putting up one hell of a fight and no one else could do it any better. The money and promises must be crossing hands faster than a three card monty game. Cant these rat politicians who do nothing and don't keep their promises be recalled like in California and Colorado?

I think you should go after the ENTIRE Queens council delegation and you can start with seeing how effective QCC by formally asking them to apply public pressure on the NE Queens delegation as a start.

I've asked a number of candidates in person this political season in a variety of races about their opinion of Willets Point and the NYCEDC. The question is always met with a refusal to talk further, feigned ignorance, or complete silence.