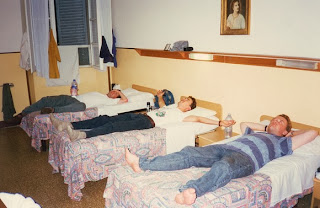 Advocates are pushing for the passage of legislation in the City Council that would permit the licensing of residential hostels in the city.

The bill, which is sitting in the Committee on Housing and Buildings, would authorize the construction and regulation of hostels. Jack Friedman, executive director of the Queens Chamber of Commerce, said he predicts that the flourishing of hostels in Queens could bring in more revenue for the borough.

“Countless tourists, who can’t afford luxury hotels in Manhattan, are drawn to Queens when they visit our city and inevitably spend tourism dollars on restaurants and other amenities in our borough,” Friedman said.

Hostels are dwelling units where guests can rent a bed and share the bathroom, kitchen or lounge with other guests. It’s an alternative to hotels and usually cheaper.

The legislation is an effort to correct the damage wrought by the 2010 illegal hotel bill that forced hostels in the five boroughs to close. Friedman said the closings were an unintended consequence of the bill, which was implemented to clamp down on illegal hotels, apartments designated as permanent residences that were improperly rented out on a nightly basis.

Friedman said hostels would contribute to Queens local economy by attracting tourists to the borough and creating jobs. He noted that studies have shown that New York City is losing $150 million annually since hostels were forced to close.

“Millions of dollars, taxable revenue, can be generated in the Queens economy,” he said. “When we welcome [tourists and travelers] to someone’s home they’re going to spend money at local restaurants and retail stores.”

The bill defines a licensed hostel as a “multiple dwelling providing lodging, food and other services to tourists, travelers and others requiring temporary accommodation.” The bill also states hostels may contain private rooms, but not apartments, and should not be occupied by the same individual for more than 29 days in a 12-month period.

“[Hostels ] would mean more to us than any other borough because we have two airports. We can attract more travelers,” Friedman said.
Despite the money hostels are projected to bring to the borough if the bill is passed, some Queens residents are worried that these facilities will attract the wrong people.

“We have enough cheap hotels already,” Ram Garib of the Queens Village Civic Association said. “If you attract the wrong people, you will attract the wrong problems in the area.”
Cynthia Curry of the Wayanda Civic Association in Jamaica said she doesn’t think the additional revenue hostels would bring in is worth risking the safety of Queens residents.
Posted by Queens Crapper at 8:12 AM

First off are these people really going to spend money in Queens or are they going to just go to Manhattan (the reason tourists come to NYC to begin with) and spend money there.

Second, who is going to oversee this program and the legality of the hostels. We here in Queens have enough illegal apartments that the city cannot control, illegal constructions, so how can we assume this disaster waiting to happen is going to be legally implemented.

The way things go in Queens with poor leadership, corrupt elected officials, etc, I see this is just another disaster and another nail in the coffin for Queens.

Is this what these people are getting paid for these horrible ideas that end up backfiring and cause major problems?

Transient housing? There are innumerable unintended consequences to this.

If a Brazilian or Boston tourist thinks Manhattan is expensive, I say bring more money next time.

Like illegal apartments in 1/2/3 family housing are doing, transient housing will hasten the death of the stability of Queens.


“Millions of dollars, taxable revenue, can be generated in the Queens economy,” Consider the source. While the CC is not quite as bad as the EDC, they are less concerned about the neighborhood than they are about making money. And, yeah: those staying at hostels are spending maybe a cup of coffee and the morning paper locally - and they're really not spending all that much in Manhattan, either, if my experience using hostels (American Youth Hostel here in the States, and various others in foreign lands)is any guide. The point, after all, is to travel on the cheap. Broadway is not cheap - for that matter, museums can be pricey, if you're going to more than one or two.

I can just picture "tourists" hanging with the people living in the Hammel Houses in Far Rockaway, gun shots heard in the distance....
This idea needs to be squashed immediately!
Since when does the Chamber of Commerce have a say in something like this?

This Friedman character is an idiot and fool to think that Queens needs this crap. Clean up all of the illegal housing first. And what's $150million worth to us anyway?
It will ge dumped into the general city coffers and Queens will not see one cent!

Most of New York CIty is just passing through, which is why they want to always take advantage and never act like they own anything

this is just a way to take protection away from tenants.

We are sooo short on affordable housing as it is, so why do we need this crappy hostel taking up more room that we do not have?

If passed phase II will be inspectors and census workers demanding entry into your homes with the police to survey your "wasted space" and it maximum housing potential.
The city knows there is NO OTHER WAY to house all the current anchor babys (future unemployed section 8 democrats for life)

Two choices: Take some into your homes or be taxed bankrupt---Its coming !!!
---

If Hostels is designated for students then OK with certain conditions and supervision fine. I don't agree with hostels for anyone else as these could bring back a SRO type accommodation that was detrimental to Manhattan neighborhoods in the past. I don't thing Hostels brought significant revenues to Queens at all - let not bring them back unless they are for adult youth and for much shorter stays maximum 2 weeks.

We are going back to the 19th century where everyone is going to have 'borders'.

This is a serious blow to the quality of life in any community.

Simply legalizing illegal conversions because everyone is slowly becoming pauperized in this economy. Bit by bit we are losing the gains of a century.

A lot of studies and research over the years gives us a pretty good idea on what makes a good community and what makes a poorly run community.

All this effort is being 'forgotten' and buried, all those laws that came from this are being changed.

The problem is with places that know better, and should be helping communities hold the line (like say Columbia and Pratt) is that they are controlled by developers.

Ever hear Kenneth Jackson. Little more than a shill for developers.

I want to share an email I received on my regarding my comments I have made about this issue on my blog and elsewhere and hear your thoughts.
--------------
Hi Joe,

I just read your post on hostels in NYC, and I think that some of the points you make are not applicable to the hostels that the city is advocating. These are not the flop houses that shady developers and land owners were opening all over the city. Those "hostels" were what caused the city to crack down on hostels in the first place.

The hostels the city is advocating are the big, high design, boutique hostels that have been popping up all over Europe and are starting to push into the US. Hostels like Generator Hostel http://generatorhostels.com/en/, who just raised 250 million Euro from Patron Capital ( a UK based private equity fund), St Christophers Inns http://www.st-christophers.co.uk/ and the US based Freehand http://thefreehand.com/, which is run by the Sydell Group, the developers behind the Ace and Nomad Hotels.

There was even an article today in the Times about how hostels are becoming increasingly popular with young business travelers, http://www.nytimes.com/2013/09/24/business/international/hostels-gain-popularity-with-business-travelers.html?pagewanted=all. Hostels of today are very different from the flop houses and backpacker crash pads of years ago.

I have sat in with the group trying to get this bill passed and the main goal of this law is to legalize hostels, but also make it impossible for the flop houses to reopen. They are doing this by making the license prohibitively expensive, where it is only feasible for big developers to open a hostel. They are also enforcing restrictions that actually are more onerous then what hotels have to follow. Actually, hotel operators don't need to have a license from the city. If this bill goes through, only hostels will have to go through the licensing process and it will be highly regulated by the city.

Sorry for the long email, but this is a topic I am pretty passionate about. I have even founded a NY based startup that allows travelers to book hostels from their smartphones. I was also born and raised in Flushing and I think that hostels would be good for the city, especially for Queens. Most youth travelers want an "Authentic" local experience and will actively search it out. They don't want to see the Empire State Building and eat in Times Square, they want to eat the best Chinese food in the city and hang out where the locals do. What better place to do that then the most diverse borough in the city?

Make it impossible for flop houses to reopen! In NYC? Faster than you can say; BWAHAHAHAHA!

@Joe: Chris seems to travel very easily from business travelers to youth travelers. Again, he's looking to make money, and that's that. If business travelers want hostels, that's a good indication that hotel's are over-priced. Perhaps THAT should be addressed. The operation Chris described is NOT a hostel, where you have to bring your own linens (bed bugs? why doesn't anyone mention bed bugs?). He's describing Eurail-pass style accommodations - he says it himself: these are NOT hostels.