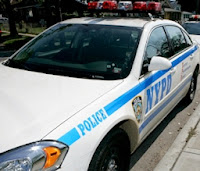 The officers have been identified as Danny Cano, 36, who is assigned to the 115th Precinct in Jackson Heights, and Roberto Espinal, 44, who is from the 110th Precinct in Elmhurst.

The two, working independently of each other, allegedly accepted cash payments ranging from $40 to $1,500 in exchange for the accident reports.

They are accused of selling the reports and the information contained within them to “runners” who would find accident victims and bring them to medical clinics and doctors as part of an insurance scheme, said Brown.
Posted by Queens Crapper at 12:26 AM

No sympathy for crooked cops but when are the doctors who are providing the bribe money going to get their just deserts.

Who watches the watchers?

Thugs with guns, but not only that. They have the means and the resources, tax payer funded of course, to be even more law breaking than some of these so called "criminals".

Cops,teachers, bureaucrats are no better or worse than the population from which they are derived

And for this they lost a million dollar pension.

Who watches the watchers?
----------------------------------
You mean besides police supervisors and other cops, the vast majority of which are honest and law abiding?
Internal Affairs, Quality Assurance, NYC DOI, FBI, various civic organizations and politicians, community councils, CCRB, every citizen with a cellphone camera, and very soon a federal monitor, a bunch of professors and an Inspector General. Did I miss anyone?

Throw these thugs in jail....and throw away the key.