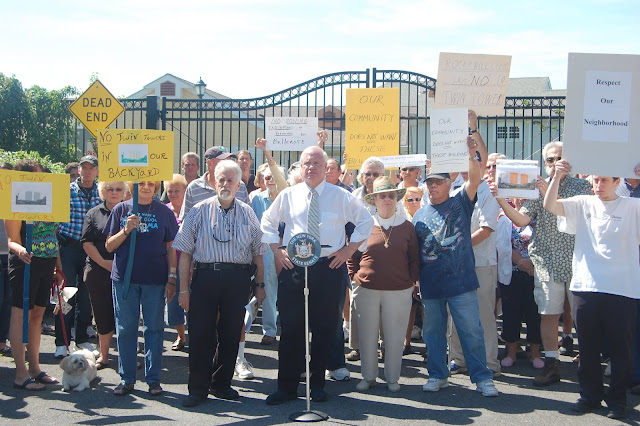 (Bellerose, QUEENS) On Saturday, September 7, Senator Tony Avella, Bellerose civic leaders and residents rallied against the Indian Cultural and Community Center (ICCC) for moving ahead with their Board of Standards and Appeals (BSA) application despite the recent release of a report by the New York State Office of the Inspector General that criticized the ICCC’s involvement in a state land sale.

Two years ago, Avella reached out to the Inspector General and the Attorney General and asked for an extensive review of the New York State Dormitory Authority’s sale of 4.5 acres of land on the Creedmore psychiatric-hospital campus in a no-bid deal to the politically connected nonprofit group for a fraction of its value.

This past week the Inspector General released their report which showed clear and convincing evidence that the ICCC not only “exploited loopholes in the statute and lapses in oversight by the Dormitory Authority” but purposely sought to deceive that agency as well as members of the community and elected officials regarding their intention to build residential housing on property which is the subject of the applications currently before the BSA. The findings in the report have been referred to the Attorney General’s office.

Despite this information, the ICCC is moving ahead with their BSA application, which is scheduled to be heard at a public hearing on September 10th.

Avella stated, “From the very beginning, I have had my suspicions regarding the ICCC’s involvement in this shady land deal. The Inspector General’s report confirms my suspicions, that at the very least the ICCC intentionally engaged in deceptive practices with the intent to mislead the public about its intentions with this property and at the very worst engaged in possible illegal activity. Obviously, this is completely unacceptable and the public deserves better. That is why I am pleased that this matter has been referred to the Attorney General for further review. We must get to the bottom of any misconduct committed by anyone involved with this land deal.”

“I am calling on the Attorney General to fully investigate the potential illegal conduct of the ICCC and for BSA to postpone any hearing until such a review is conducted,” concluded Avella.

With his suck-sess record downstate...no wonder he chose to remain up in Albany.

I WANT A REFUND OF MY DONATION to his beep campaign.

It's much easier to hide in the bushes upstate, or under Toby Ann's skirt.

A shady land deal in Queens! C'mon! That lady in the dark glasses and wig standing behind Tony looks a lot like Claire Shulman and by the way where was Tony when all the shady dealings were taking place on the CYO land in Whitestone or the contaminated land operation was going on by the Vallone lobbyists.

Why does this city allow foreigners to run it?

Cardboard signs, 99 cent store sandals and flip flops ??
These people really need to step up to some hair dye, wardrobe, pitchforks & baseball bats to be taken seriously.
Unless you have $100,000 its the only way to get the broadcast TV news attention needed for the cause.

I worked for NBC. All the major media producers are interested in is colorful characters & sensationalism.
Its all about ratings and what the ***general** public wants to not suits & ties Tony !!!
This is why very educated honest people who truly mean well lose !!!
If Avella had a good experienced Hollywood PR agent & makeover he would have kicked ass in the election. Now we get another 360 deal of eating sh*t and taking it in the ass !

With politics or entertainment-image & marketing come first, most your honest lawyers, pols and white collars don't get this !

Here ya go..another Avella rally (photo op).
Senator Avella, thank you and please keep up the photo ops. At least you and your office are getting involved. Where's Councilmember Mark Weprin on this one.

Senator Avella , thank you and keep up the good work

Well, how did the BSA hearing go.
Did this get rubber stamped or did they do the right thing

Lets all chip in a dime and give Mr I Want My Donation Back his money.