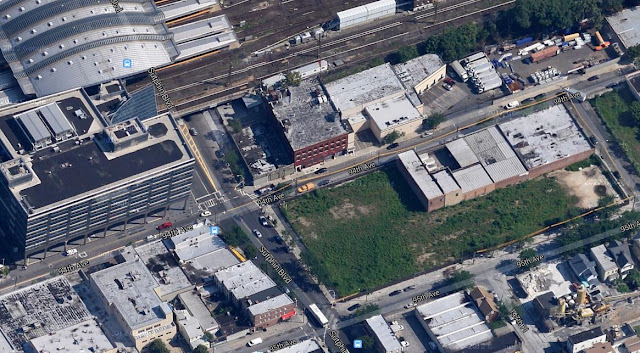 The Metropolitan Transportation Authority is expected to green light a development project on Wednesday that will result in a new $35 million hotel in Jamaica Queens at the Long Island Rail Road station.

The MTA's finance committee approved the deal on Monday. It will go before the full board for a vote Wednesday morning. A spokesman for the agency said the board is expected to approve the transaction, which involves selling a plot of land to developer, Able Management Group, for $1.7 million. Able was one of two firms that submitted a request for a proposal last year to develop the property into a 210-room, 24-story hotel.

The MTA owns about a third of the land, the full cost of which is $4.5 million. Located across from the AirTrain Station, the hotel is a coup for the Greater Jamaica Development Corp., which owns the remainder of the land.
Posted by Queens Crapper at 12:39 AM

But with 70% of those passengers passing through Jamaica being airport workers, who the heck will be using this hotel?
Who in their right mind would venture past the exit gate and walk into the bowels of Hell that is Jamaica??
While they are at it....what is the status of the retail occupancy that sits under the Sutphin Blvd overpass? I don't see anything worthwhile happening.

Not only will this be a coup for the Greater Jamaica Development Corporation but a coup to the Jamaica area, which finally (and hopefully) this may be the move to spur more good development, cleanup the area and bring in more quality businesses. Let's face it Jamaica cannot go any lower to the bottom, it is already there, so there is no where to go but up. There is too much potential here to continually be wasted over and over again. I say gentrify the hell out of the area.

anon#1, It doesn't matter if its viable. it sounds sooo good and somebodies going to pocket a bundle. besides where can you get a "plot" of land in NYC for a mere $1.4 Mil.?

Joe. Look into who the developer is and his background. You may want to change your tune.

To Anon #1, if the area was eventually cleaned up this could help, but if they do not cleanup the area and create good development, you are right, it will just sit.

As far as the retail occupancy under the overpass, all that space has been sitting empty for a couple of years with the exception of the one space which recently has a bus terminal to take people to the gambling resort (which goes against the funding for this space, it was to only be retail).

I still try to keep somewhat of an optimistic attitude because I do live here and want to see change, but I said somewhat. Remember though many areas of Manhattan and Brooklyn were bad areas that eventually turned around. This can still happen to Jamaica, but only with top notch leadership willing to stick their neck out.

But you have to at least try something, otherwise your alternative is nothing, which solves nothing.

It is only good news. Agreed, Jamaica has been a hell hole for 40 years. Build it and someone will stay and sleep and eat and spend some money.

The politicians who represent Jamaica Queens are so corrupt, unethical, worthless and incompetent that buildinig anything worthwile in Jamaica will be an absolute failure.

They need to clear a 5 block radius of all the bums and derelicts before any hotel construction is considered.

I do agree with you Joe that there is always hope. This could be the stepping stone for better things to come.
But I reiterate the fact that the new retail space still sits empty after more than 2 years. This says a lot about the failure of those behind that project. Politicians are notorious for supporting these types of projects BUT do not follow through ..and just drop the ball....much like other ventures taken throughout Jamaica at the hands of elected officials. Well, you know how it works.
I do think that the new rib joint is a positive sign however and hope to try it out soon. Maybe I'll run into you.

Nothing brings the hookers like a hotel near a transit hub.

And what happened to the Hilton hotel built by the Van Wyck that ended up becoming a homeless shelter..and god know how much the City pays to put people up in there. This isn't a face value deal.

Stay in a nice and safe hotel in LIC. Nice views. Nice people. And they all provide shuttle service to all airports. Who would want to stay in Jamaica?

I hope it doesn't go through....the last thing queens needs is another unaffordable housing area. I understand that this is only a hotel but the second you bring tourists into a place, the next people to come are the yuppies who will want to move there and make the rents and houses unaffordable. Nyc needs no more new developments that are out of reach to the "middle income". Jamaica needs to stay an affordable neighborhood. However, I do agree that there are a lot of shady characters out there, but I don't agree with making it an overdeveloped area like lic is. Nyc really should be tighter over the amount of people we let to come and live here.....we have 8.3 million people......is nyc really ready for 9 million people? I don't think so.....I don't know why anyone wants to live in nyc, I'm ready to move out of it!! I'm so tired of the crowds and living on top of each other and only getting a hole in the wall for 1600/month in an area that's not even by the subway!!

I know I said to gentrify the whole area (in my fit of rage), but in reality I certainly do not want to see Jamaica gentrified to the degree of a Long Island City or Park Slope. BUT, Jamaica can no longer stay a run down ghetto because no one benefits by this, not businesses, not people, not property values, no one benefits by this at all. So something needs to be done with Jamaica after years of neglect by horrible, corrupt, lazy and incompetent leaders who have no vision, do not follow through, do not care about anything but power, paychecks and pensions and are as much to blame for the condition of Jamaica as are some of the people who live here, even more so.

Jamaica has remained a shithole since the late 60s, despite York College, and despite the NYS Offices and Court buildings. I say try ANYTHING at this point to get ANY kind of change. There is absolutely nothing to lose.