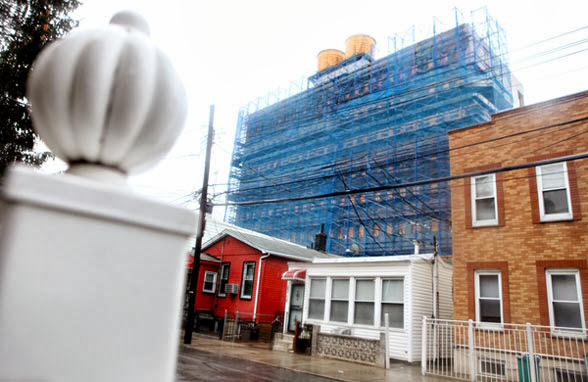 ADVISORY: AVELLA AND ASTORIA RESIDENTS TO RALLY AGAINST DEVELOPER OF MEDICAL OFFICE WHO IS THREATENING TO SUE RESIDENTS TO GAIN ACCESS TO THEIR PROPERTIES

Today at 10:30 AM, Senator Tony Avella will be joined by Astoria residents at a rally protesting the developers of a proposed Medical Ambulatory Care center being built at 23-25 31st Street who are threatening to sue the residents in order to gain access to their properties to complete the construction. This is despite the fact that the developer has already encroached on and caused damage to adjacent private property.

Avella held a rally this past May regarding the obnoxious and blatant violations of the zoning and building codes by this developer at this construction site. At the time of the initial rally, the construction was causing severe damage to the abutting homes, causing them to shift from their foundation. Residents had also obtained reports from professional structural engineers confirming that the homes located at 23-26/28 32nd Street are no longer salvageable and have to be torn down due to all the damage incurred by the construction. The homes located at 23-24/22/20/18 were also severely damaged and repairs would be extremely costly.

Now, the developer has sent letters to the residents indicating that they will be taken to court unless they are given access to their properties in order to allow the developer to finish the work.

WHERE: In front of developer’s office at 23-18 31st Street in Astoria

Anyone notice who's missing? (Vallone, Gianaris, Simotas...)
Posted by Queens Crapper at 8:17 AM

Tony is the BIG DOG. This is a rare politician who is not afraid to stand up for what is right.

Tony reached out to me last week and then came out to my neighborhood of Jamaica and took a brief walk with me to see some of the garbage problems near my building. He noted the addresses and shot out letters to the various appropriate people (http://cleanupjamaicaqueens.wordpress.com/2013/09/25/cleanup-jamaica-queens-brings-in-the-big-guns-senator-tony-avella/).

He then asked me to compile a list of all problem areas and send them to him, which I did. He is then going to set up an all day walk of Jamaica with me and mark down all violations that are in my community.

A very rare politician who actually cares about Queens.

Tony is the man. THE BIG DOG!

is there a law that says you have to give construction crews access to your property?

Avella is funny. too little too late.

Read the question that Crapper closed the post with. Your complaint should be towards the people the question was ponted to, rather than getting on Avella's case.

This is Vallone's neighborhood, one block from his office. Obviously, he was totally aware and involved in the project from the outset.
Why is he NOT protecting the members of his (our) community?
What happenned to the campaign slogan VallONE? Why would he side with developers over the few homeowners? You write your own answers.
Incidentally, when viewed from afar, it is a monstrosity totally out of character with the neighborhood.

Sounds like these developers should be shot in the head and left for dead.

I don't understand what legal standing the developer has to enter the private property of a neighbor so they can do... construction work.

If they want access, the homeowners should charge them rent. I'd say $1,000,000 per day might is a fair price.

What's worse is this construction work they want to do would probably put the homes (and the lives of those in them) in even more danger.

This is well beyond hideous. The Vallones are complete assholes.

This is a great example of what to expect from a Vallone!

If you're a developer he's your friend and ally - if you're a constituent expect to get fucked over!!!!

Wake up - the Vallones are lobbyists in bed with developers - they don't give a shit about the people who elected them - assuming that they were ever actually elected - it wouldn't surprise me to hear that they've stolen past elections - especially that little weasel Paul!

Lets see some of his legislation for the community:

Prohibits the manufacture, distribution, sale and use of commercial feed for poultry containing roxarsone

Establishes the traffic infraction of interference with a funeral procession

And did I mention that that budget he distributes in in the millions?

But something like this building and the abuse of his constituents?

Maybe the community needs to march on his office and remind him why he is elected and who he serves.

Too bad New Yorkers have no recall procedure in their constitution. Be damn careful which crook you vote for or grin and bear it!

"Sounds like these developers should be shot in the head and left for dead."

Hey crappy. This is wrong and should be deleted.

Astoria's problem is that they let the pols walk all over them.

The need some backbone or that community has no future.

Maybe the new hipsters who grew up in places that had real government can teach those local Italian and Greek peasants some lessons on democracy.

If Tony continues to do these things he will be the beep in 4 years and mayor in 8.

You saw it here first on Crappy folks.

Well Joe, nothing against Tony, but if he becomes Mayor it will be a first for Queens in NYC history. That's a pretty tall order. He needs to get on the issues earlier or he'll continue to be called Photo Op Tony. Is he really making a difference.

Anon No. 16: At least he got on the issue here. I don't see any of the elected officials from Astoria lifting a finger, which is the point that Crapper was making.

Yes, but the elected officials in Astoria do not do a lot except for posing with tweeder groups and helping those that facilitate development.

Part of the problem is that the locals, to date, do not expect much from them and pretty much accept anything they are told or read.

Any one of these would have been real hot button issues but where your grew up in a culture that expects little, and sees less, the local presses' view on reality is perfectly fine.

Until the crap is in your back yard.

Then you are expected to either put up or shut up.

Everything is done to minimize the public's involvement in any serious level on how they are governed or the direction of their community.

The rest of Queens, in rejecting Vallone as beep, has no idea how close they came to disappearing into the Hermit Kingdom of Vallonia.

All this totally against, in spirit, the way government is supposed to be.

Uh, I think Tony is scheduled for retirement in 8 years.

AND...he gets to collect two pensions, I believe...
one from NYC and another from NYS.

Not bad, eh?
Maybe he'll run for Congress next and collect a 3rd!

I wanna know...
WHO muscled Avella into leaving the beep race?

Was it a mob-union threat, or did somebody have some dirt on Tony to black mail him with?

Shame on the quitter!

It ain't in "junior" Pete's backyard so why should Don Pietro care?

That's what happens when a dumb electorate lets their pols steamroller them!

Peter Vallone has always refused to even speak with the home owners. Senator Avella continues to push for what is right, even after the election cycle. Other "Friends of Driscoll" are nowhere to be found on this. If you own a home on 32nd St or 30th St., RUN!!!! They will come for you too, thanks to new zoning.