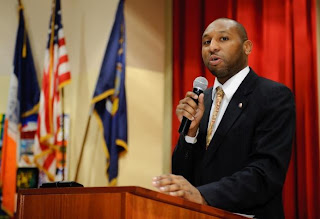 A Queens businessman was busted on Friday on charges that he and two associates tried, unsuccessfully, to bribe a City Councilman.

The councilman, who a source identified as Donovan Richards (D-Queens), then immediately reported the bribe attempt to the authorities, leading the trio to get nabbed by the city Department of Investigation in an undercover sting, officials said.

The bribe attempt allegedly happened earlier this year, when Tarsem Singh ran into opposition for his application for a liquor license, officials said. Richards and community members fought against his proposed North Conduit Ave. liquor store because of its proximity to a high school, said the DOI.

Singh and one of his associates then arranged for a sit-down with the councilman, and attempted to pass him an unspecified amount of cash at the meeting, DOI said. The councilman spurned the advance, which was caught on a security camera, officials said.

After Richards reported the bribe attempt to law-enforcement, a DOI undercover investigator posing as one of his reps reached out to Singh to arrange another sit-down at a Queens diner, officials said.
Posted by Queens Crapper at 12:57 AM

Sounds like he may be the first honest Democrat in Queens in the last 30 years.

Guarantee the party will try to bury him.

Kudos to Richards, I always had a feeling that he was a person of integrity and this shows it. In a sea of corrupt, scandal baggage, questionable politicians in Jamaica (Smith, Meeks, Huntley, Wills, Cook), it is finally good to see one of our leaders stand up and show some morals and a genuine care for the community. If it was any of these other clowns, we would have had another scandal because their greed would have gotten in the way.

The party put him in.

Oops! We all make mistakes.

Is this the same Tarsem Singh who directed the films Mirror Mirror, Immortals, The Fall, and The Cell?

Singh gave the undercover $500, and said the councilman would get $2,000 more if he supported his bid for a license at a State Liquor Authority hearing.

I would have demanded at least 50,000 Euros wired to my private account in Switzerland!

What heroics? He'd have to be really stupid to get his palm greased in the current political atmosphere.

All the electeds are keeping their noses clean until Halloran, Smith, and Tabone are sentenced.

And Mr Singh will certainly feel the wrath of American Justice, in the form of a $500 fine.....

Donovan Richards comes from the mold of James Sanders- an independent Democrat who doesn't owe his victory to County.

The article stated: "Singh gave the undercover $500, and said the councilman would get $2,000 more if he supported his bid for a license at a State Liquor Authority hearing."
For a measly $2500 bribe, even Halloran wouldn't have gone along.

I have an alternate theory than some of you. Donovan Richards is a good guy doing the right thing - the same that all of you would do under the same circumstances, right?

Mr. Ultra right ring religious fanatic. Who is also an extreme hypocrite by the way.

I AM NOT AN ATHIEST AND YOU KNOW IT

Going to church doesn't make you a good Christian boy.