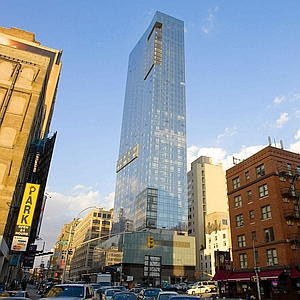 I wanted to provide you with an update on our investigations into the legality of the Trump SoHo "Condo-Hotel" at 246 Spring Street, a development which GVSHP from the very beginning opposed, claiming it would violate zoning regulations.

After months of inquiries and investigations by GVSHP, we have discovered that the city officials have repeatedly violated their commitments regarding the Trump SoHo, allowing the controversial development to avoid legal requirements that were the condition for its construction.

As you may recall, GVSHP and other community groups opposed permits for the towering Trump SoHo because the "condo-hotel" violated local zoning prohibitions barring residential and residential-hotel development. Had city officials enforced the existing zoning as we argued, the project could not have been built as planned.

Instead, the City, City Council Speaker Quinn, and Borough President Stringer insisted over our objections that the planned development did not violate the zoning, and its construction must be allowed. They offered instead a "legally binding restrictive declaration" as a condition of the development proceeding, which they claimed would ensure in perpetuity that it obeyed zoning restrictions. The deal required that the Trump SoHo undergo annual independent audits of its records to prove that the development was not being used for illegal residential or residential-hotel purposes. Trump SoHo was legally required to submit the independent audits to the City each year for their inspection and review to ensure the law was being followed in every case.

In the intervening time, GVSHP had found numerous indications that city officials knew that the Trump SoHo was being used for purposes that violated the zoning. We brought this to the attention of the City, Council Speaker Quinn, and Borough President Stringer, and repeatedly asked for the inspections required by the "legally binding restrictive declaration" to substantiate whether or not the law was being broken. We received no response from the City, the Speaker, or the Borough President.

In response to this stonewalling, GVSHP filed a Freedom of Information request, which city officials were legally obligated to follow, demanding that the City, the Speaker, and the Borough President release any materials pertaining to the legally-required audits.

As a result, we discovered some very disturbing information. We found that in the six years since the Trump SoHo's construction, none of the legally-required audits which were supposedly a condition of the project being built had ever been submitted. Incredibly, we additionally found that neither the City, the Speaker, nor the Borough President had ever asked for any of the legally-required audits, even though their review by city officials was supposed to be the means by which the project's conformance with the law would be ensured. Finally, and perhaps not surprisingly, we found that no penalties had ever been issued for the Trump SoHo's failure to submit the audits, as provided for under the terms of the agreement under which the development was allowed to be built -- see letters here.

In response to our Freedom of Information request, city officials have now been forced to ask for the past six years of the Trump SoHo's legally-required audits. However, so long after the fact, it is inconceivable that such a request will result in any sort of meaningful investigation into whether or not the development has been violating the law. This failure to in any way enforce the terms under which these city officials allowed the highly-controversial and legally questionable Trump SoHo to be built -- in spite of well-grounded contentions before, during, and after the building's construction that it violated the zoning -- is deeply disturbing. GVSHP is now investigating all options for next steps in light of this egregious breach of commitments to the public.

(If they'll screw over the Village, just think of what they'll do to Queens!)
Posted by Queens Crapper at 12:36 AM

Here's another good reason to keep away from Stringer ...he believes that the rights of pedophiles is more important than the rights of children.http://www.thegatewaypundit.com/2013/09/ny-controller-candidate-scott-stringer-voted-to-keep-namblas-tax-exempt-status/

The only time the Manhattan based preservation crowd notices Queens is when they collect dues or garner support for programs that almost exclusively focus on Manhattan.

They are in a position to help Queens through support and education. They have support and resources we cannot even imagine.

The only way we can change this is to tell them to go * themselves and lobby with the developers to overturn the Landmarks Law.

I know I know the folks in NE Queens will scream bloody hell but they are just as bad as Manhattan.

They got theirs and the rest of us can lump it. The chips are stacked against 90% of the city with absolutely no hope of change.

Well my friends, when we are all in the lifeboat floating in the middle of nowhere it might hit us that it given a second chance, we should all cooperate around the city.

Only then can we marshal the resources to put this development monster to bed once and for all.

In the meantime, all I can ask this guy to do is phone Queens Borough Hall.

Spitzer may be a criminal, but he's a lone wolf criminal in the den of the Democratic jackals who don't want him there. Spitzer will defiantly spit in the eye of Cuomo and the NYC political status quo. he's got my vote.

Well, the morons of Manhattan voted Stringer in AND the morons of Queens voted Katz in. These two pieces of CRAP are some of the most entrenched pieces of CRAP within the real estate industry that ALLOW these blatant violations and ALLOW our once great neighborhoods to turn into Trump Plazas and Vornado Centrals.

People will never learn in this city. So the next time you look out your bedroom window and see a BRICK WALL 2 inches away from you, REMEMBER, YOU VOTED FOR THIS CRAP!