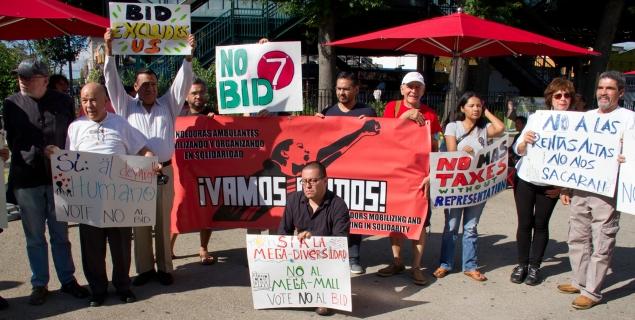 An ambitious proposal to create one of the city’s largest business improvement districts in mostly immigrant Jackson Heights and Corona would hasten gentrification and spoil the area’s Mom and Pop character, business owners charge.

That potential expansion has some immigrant merchants concerned they will be priced out of the neighborhood and the area will lose its trademark character.

“They are going to standardize Roosevelt Ave.,” crowed Freddy Castiblanco, owner of Terraza 7, a bar and jazz club. “They want to clean Roosevelt Ave. of that diversity.”

The group rallied Sunday against the sweeping overhaul — which would require each shop owner to pay a fee for sanitation, security and other services once provided exclusively by the city with regular tax money.

The BID expansion is a component of Councilwoman Julissa Ferreras’ “New Deal” for Roosevelt Ave., which focused on cleaning up the corridor, which cuts through several Queens neighborhoods. Ferreras cites safety issues, poor lighting and cleanliness as the top complaints among residents.

“The current problems on Roosevelt Ave. hurt everyone,” Ferreras said in a statement. “This is why I believe a business improvement district is a solution to this problem.”

So the short answer is yes, they want to gentrify Corona.
Posted by Queens Crapper at 12:10 AM

I have always told people that if you want to catch the heart of Queens drive under the el at midnight.

Clean up the area - only shady businesses don't want the bid.

Everyone seems to dislike the behavior of those "troublesome" Hispanics even one of the local elected officials.

H-m-m-m,
can this the downside of the "diversity" that our pols often praise to get minority votes?

LOL!
One thing for sure. A lot of politically connected folk are making bundles of money off of these BIDS.

Take a good look at the one in Flushing that's a mismanaged failure. Shame on you, Dian Yu!
Who got this executive director his lucrative job?

There's a BID in Floo-shing and those shady businesses there are still operating.

Do the local whore house and gambling parlors in the downtown hub pay taxes?

Not unless Santa Claus collects them!

If the business owners and their customers showed some respect for the area, a BID would not even be up for discussion.

This is really the last gasp of the first worlders to reverse the descent of Corona into a synthesis of the slums of Mexico City, Shanghai, and Mumbai.

Here is a message for some of the immigrants: Keep your area clean, sweep up in front of your businesses and homes and as the other poster said, do not try to do shady shit (illegal businesses, illegal apartments, etc). First off a BID will hardly gentrify an area. Jamaica has three BIDS (Jamaica, Sutphin and 164th St Mall Association) and the area certainly is not gentrified. BIDS help to improve and especially clean up the area. So if you would keep your areas clean instead of being slobs and low class you would not have a problem. In the last decade every nice area that soon got an influx of new immigrants turned to a dirty shitty piece ghetto. So maybe the immigrant communities need to start looking at themselves and stop placing blame elsewhere. Stop being low class slobs. Take some pride in your community and your new country and stop treating it like the shit country you left to make a better life.

Written by a person whose family immigrated to this country.

Who cares? Gentrify the shit out of that shithole.

Steinway Street has a bid run by, yup you guessed it, George S and CALDC.

I had heard that a ton of money given for public programs went into buying themselves a cellar office.

Joe, the pedestrian mall in Jamaica is on 165th Street.

Snatch up some property now and gouge the hipsters for some easy rental income!

First off, I think a huge visit from immigration is called for in this area to get rid of all these illegals, then they can make the place better if "middle income" families could buy houses there. I'm white I wouldn't mind living there if there wasn't such crap living there. Why is nyc one of the only places in this country where you can make 60k/year and still be broke? Every single "middle class" neighborhood in queens is now way too expensive to live in. I don't want to live around a bunch of illegals or dirty immigrants who get their housing through their "churches" (and then claim that they actually bought these houses and then have the nerve to claim it as "their" neighborhood) anymore. Queens needs to bring back "middle income Americans". Enough with the immigrants who don't respect america at all! We need cleaner immigrants who will actually respect our culture and our country

ANON said: "Queens needs to bring back "middle income Americans". Enough with the immigrants who don't respect america at all! We need cleaner immigrants who will actually respect our culture and our country."

AMEN brother, AMEN. My family were immigrants, but they welcomed their new country (held on to some of their traditions while embracing and assimilating to their new country) and took pride in their community, took care of their homes and made sure their block was clean all the time. None of this bullshit that some immigrants do like throwing garbage all over, not taking care of their homes or yards, parking cars on sidewalks or grass, cementing over every little piece of green. Hell if they wanted a community that looked like shit, they should have stayed in their own shit hole country. Of course there are many immigrants who respect and take care of their community, but many are certainly not in Queens.

a few rounds of deportations will clean up the area.