Raucous parties being held at synagogue 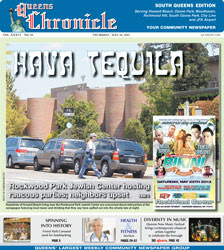 After a summer of quiet, neighbors of a Howard Beach synagogue where raucous parties were taking place say the problem is back and a lawyer for the temple says it has filed suit against the caterer he argues has been hosting the parties behind the center’s back.

Last spring, residents of the blocks surrounding the Rockwood Park Jewish Center at 157th Avenue and 84th Street complained that the center often hosts wild parties on Saturday nights that spill out onto the quiet residential streets sometimes as late as 3 or 4 a.m. At least half a dozen parties occurred in 2012 and early 2013, according to residents who live near the center.

The problem resurfaced again on Saturday, when some of the same neighbors said another party featuring Latin music took place at the center’s catering hall and went on well into the night, spilling out into the community, affecting residents on surrounding blocks.

The party took place only two days after the Jewish holiday of Rosh Hashanah and a week before the solemn holy day of Yom Kippur.

A man who answered the telephone at the caterer’s number declined to give his name but said the allegations are false.

“There was no party here on Saturday,” he said.

But neighbors, all of whom declined to have their names published, say otherwise.

Unlike past parties, Saturday’s event was not widely promoted. In the past, the hosts would post promotional materials on Facebook, some of which advertised the venue as “Rockwood Center,” not identifying it as a house of worship.

The synagogue said it was not aware of the parties and pointed the finger at the caterer, accusing them of using the space without their knowledge.

Bravo on that front page headline... I bet they served traif as well.
Posted by Queens Crapper at 12:14 AM

Liar Liar pants on fire to the person quoted in the article as saying there was no party!

Well the doors open at 10PM - of course they are partying until the wee hours!

Catholic churches in Western Queens started whoring out their auditoriums to Mexicans, Dominicans and Columbisns about 15-20 years ago. The result was gang shootings and stabbings at "baby christenings" and "sweet 16" parties.

The synagogue said it was unaware????? The rabbi knew. Just like he knew about the prior parties and the illegal card games and all the other shenanigans there.

They dirty dance, smoke dope and even fornicate in these "party" synagogues. In the dance hall right adjacent to the sanctum sanctorum under the very nose of Hashem.

I have to listen to loud Music every week here in North Flushing.
It seems almost every Sunday night the Music freaks are playing the music west of Flushing somewhere in Corona and the music makes it way east and disturbs my peace and quiet.

there was a profit to be had, so of course a rental deal was made.