"I have a recurring chronic problem that I need your help with (as I asked in the past), the crap neighbors next door to me at 93-45 ______ are at it once again.It used to be that they had a loud party about once a month, but they've been out there four consecutive weekends. The cops did come by and quiet them on 5/12, but they were right back at it the next weekend.That's bad enough, but yesterday they resumed burning wood for their BBQ (they place a caldron on top). Last summer, they burnt an old bed-frame! 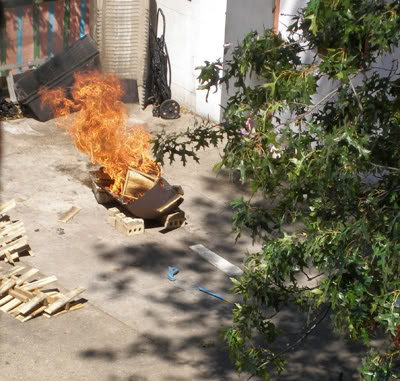 And now for the daily annoyance: their bottle and can recycling business. This can start before 6 AM and run to midnight. They store their garbage as far away from their house as possible. Which means it's kept right next to the fence that adjoins my property. This smelly mix brings about little - and not so little - rodents which makes me fearful for my dogs. Who know what the rodents might drop (and do)? Today, I had to chase off a mouse that wanted to come into my house! Arghh!!! And, rain is no deterrent to their garbage picking as you can see from the pic below taken less than an hour ago. 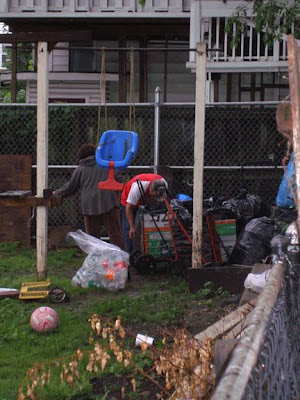 I've placed calls to 311 for years about this house and not a damn thing changes. These "people" simply don't care about anyone else but themselves.

My apologies if this message isn't as lucid as it should be, but I'm f^&*#*g pissed off, severely stressed and sick and tired of this constant destruction of our quality of life. Especially since there's enough other crap going on around here that we have to endure.

I'd love to move, but to where and with what money?? And what's not to say that there's another family of a-holes waiting there?

My wife is afraid of retaliation on their part if we complain (we've already had some trouble along these lines), but why the hell should we be forced to live this way? - Rich Parkwood

PS My nice neighbors (on the other side of my house) think that they are renting out beds like a hostel. I wasn't sure about that idea until I saw three unfamiliar backpackers arrive yesterday evening."

More photos here.
Posted by Queens Crapper at 12:03 AM

First off, they are not running a hostel. That's ridiculous, its either a crack den or a shooting gallery. The mattress they burned was to get rid of the evidence, probably another overdose put to much dna on it.
You live in Queens, what do you expect? Kind, caring and considerate people. Hahahhhaa, That's a good one.
Go read the article in your local paper, about your beautiful, bucolic neighborhood.
The great exodus of the 70,s should have taught you something.
City living at its finest.
Enjoy

It may in fact be that they are running an illegal hotel. I would call 311 about each separate violation and be vigilant with follow-up.

Illegal burning, disposal of garbage. Get them on everything. Stay on it.

On the other hand, it is probably correct that your relations with other people are likely to follow you wherever you go. So, while I think this untenable situation has made you ill, you now also need to treat your illness.

In Elmhurst - Maspeth 78-23 57 Ave is the same. Has parties for lonely Mexican illegals - a haven for a cot and a meal and weekend summer blow-outs that include alcohol and female company. The house is HQ for car service base and the 110 police precinct is too far away to bother with this address which straddles 2 precincts. What to do? Go after Mayor Bloomberg who supports illegals residing in the city and turning Queens into an illegal dumping ground!

Calling 311local is a waste of time.Decent people wouldn't behave like that, and if your neighbors are decent they wouldn't cutup with it. Do the smart thing, sell your house, leave the cesspool to the loons that enjoy that kind of bizarre living.
Why torture yourself? Just look around, this is no the Queens you grew up in.

Why are you wasting your time there? The United States is full of beautiful places and decent people.
The only people trying to combine you to stay are political operatives whose machines are finished from the exodus from these areas. If they love it here so much, let them buy you house And lie there. Don't waste your time there.

I agree with Anon #2. Be vigilant about complaints. Call the department of health about the trash and rodents. Don't let these people drive you out of your home, and don't listen to people like anon #1.

The Department of Health

Please let them know of your concern. You can also file complaints with 311 and the Department of Sanitation website and contact Commissioner John J. Doherty. You must have your voice be heard. The more people they hear from the more likely they cannot ignore the issues and something will be done.

311 will get you nowhere.
The fire dept does care and will come. Meanwhile, the more agencies nosing around over there, the better for you. Just make sure you don't have any violations you can be ticketed for.

That's right complain about your neighbors and "don't let up" Maybe after months or years of careful documentation, somebody might do something. After all why would you spend your time enjoying yourself? You could spend years complaining about your neighbors instead. Real quality of life.
Tell the political operatives, who are so desperate for you to stay, to fix the problem. Good luck with that. If your municipality doesn't give an immediate response to such obvious problems , than its time to move.

Yep, call all those people on that long list. Write letters to them day and night. Don't ever stop, have your voice heard. Oh what nonsense. In a decent community, you make one phone call and the problem is solved.
The only person you should call is your realtor. Go live smoker decent people, you will see the difference immediately. Good luck.

Tell the political operatives, who are so desperate for you to stay, to fix the problem. Good luck with that. If your municipality doesn't give an immediate response to such obvious problems , than its time to move.

--
Hell no, minimize your effort and maximize embarrassing the pols - every time they show up hastle them about this - community board too.

Tape it, post their recation. Make it a farce, belittle them and humiliate them every change you get.

Trust me, these little straw men can't take the pressure.

I love you people that think it's so easy to just up and move!

You Need to call the housing authority and actually go down to the precinct and lodge a formal complaint. You can take vids and pictures and put them on a CD to give to both organizations. They have to accept them and add to the file. Running out is not really the answer although is the easy way out. No matter where you go you will have good and bad people, so best to keep vigilant as someone said. Please know I am from Queens and moved out (I will be moving back soon), and I have similar experiences in Boston too. It is everywhere unfortunately. Stand your ground - do not get involved with them personally. You can do all this anonymously and also if you can involve other good neighbors who feel the same as you that would be great. Perhaps a petition of sorts? Bottom line is this kind of stuff lowers property values in an already-struggling economy, and are huge safety/sanitary issues for the people around. This is your home, where you work very hard to make it as peaceful as possible. You have a right to stand your ground... running is not always the way to go. We are after all, New Yorkers! ;) Trick is, you yourself have to be such a pain in the ass to these organizations and continue to be in their eye until you are taken seriously. Be persistent, be smart, be safe. Good Luck.

maybe too you can call the news stations and let them know after numerous attempts to deal with the Lords Above, might want to expose the situation that way too - Certainly you are not alone. Public pressure to Politicians always gets attention. Make MANY Copies of CD's with Pic and vids and distribute to as many as possible - someone will pick it up eventually - this seems to be a real issue to the general population.

Listen, go to "revengeguy.com" for advise. You can tell the revenge guy your problem as he deals a lot with these types of scenerios and he will give you instructive, precise steps that you can take. Also, you can make the lives of these scumbags hell as well. Another thing you can do is find out who the owner of the property is and sue the living hell out of them, with every kind of civil suit possible, until they evict the scum.