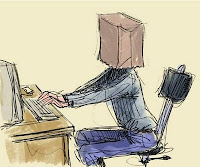 Republicans in the state government in Albany, N.Y., are attempting to pass a law that would ban anonymous comments on the Internet (to articles such as this one, or even to websites such as the one you're reading this on now). That clever login name you came up with? Sorry, you'll have to use your real name instead.

Luckily for all of us, this is never going to happen. Even if New York Republicans had their way, and actually passed their so-called Internet Protection Act, once it arrived in a federal court it would be tossed out in a "New York minute" (as they say).

This isn't just overconfidence in the judicial branch or civil libertarian smugness, either (although the "New York minute" bit is admittedly rather snarky). Legal precedent from only a few years ago already exists, which not only puts the First Amendment stamp of approval on online anonymity, it actually says that any attempt to uncover the identity of the commenter would be unconstitutional. And the case hinged not on political comments on a website but actual email spam. Political spam is protected free speech -- so how can website comments not be?

Speaking out on politics in whatever technological medium exists -- and remaining anonymous while doing so -- is not just one of the foundational rights our government was built on, it was actually largely responsible for our nation and our government even existing.

That is not going to be taken away by any misguided modern group of politicians in Albany, New York. Whether they've read and understood the Constitution or not will not matter, even if this pathetic excuse of a law is actually passed. Because it won't last that "New York minute" in federal court, before it is tossed on the historical ash-heap of past attempts at such censorship -- and, indeed, laughed right out of the courtroom.

This actually sounds like part of Gov. Cuomo's "war on cyberbullying."
Posted by Queens Crapper at 12:07 AM

I guess all those apple bonking crooks upstate don't like reading critiques about themselves online.

Did Toby Stavisky introduce the bill?

Do you know how "Anon" handles you F'in with their internet rights?

Whoever is trying to pass this bill is in some SERIOUS trouble.

Did you read the first sentence?

Toby Stavisky may be a lot of things, but she's not a Republican. Afact for which Republicans must be grateful, and a lot of Democrats aren't.

This bill should be titled " How to Protect the Politicians & Marginalize the Free Speech of Citizen John Q. Public ".

Throw the republicans out of office and teach them a lesson in real freedom. Thomas Paines pamphlets during the revolution were written anonymously as were the federalist papers by Hamilton and jefferson et al.

Is the Queens GOP in favor of this? What about the republican congressional candidate? Is he for oppression of free speech as well? As long as it's not his.

it appears from his opinion expressed there that at least one city councilman has common sense and is watching our tax money from being wasted by Prog/dem/libs in NYC.

you are truly an advocate of "BREITBART IS HERE", to expose media false reporting to citizens. DON'T QUIT !!

There goes Gramps again. What plane of reality it is this time?

They, and their wealthy businessmen backer would like nothing more than to 'tame" the internet and turn it into another wasteland of shopping, celebrity gossip and right wing jingoism.

Thankfully they are too stupid to understand how easily this sort of thing gets circumvented.

You're not too sharp on my
sarcastic intent either bub!

She is, however, a CVNT...
not to be trusted to turn-coat at any time to preserve the dynasty.

Halloran is republican so I guess he's for you losing this first amendment right as it's his party that's pushing for it.

the United Nations led by China, Russia, India, Brazil are attempting to control the internet.

the U.S.House Of Reps. is presently studying the proposal of the U.N Telecommunications Div.

the One Worlder's never give up.

who will their president be????

Of coarse the politicians want you to use your real name. How else can they have their political operative tear people to shreds in order to silence them.
I thought the Soviet Union was gone.