Did you hear the joke about Megaprojects and affordable housing? 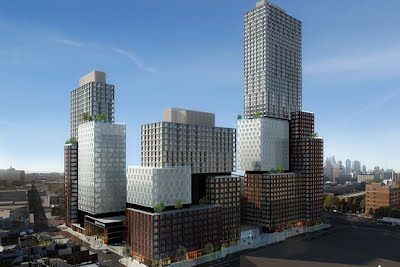 The promise of more than 4,000 units of low- and middle-income housing was a significant selling point for two of the city's largest new developments, Atlantic Yards in Brooklyn and Willets Point in Queens.

Today, they are moving forward, but the housing pieces have been pushed back for years behind other portions of the multibillion-dollar projects, as the boom-era visions are proving to be difficult to see through in a slowly recovering economy.

In recent weeks, the Bloomberg administration reached a tentative deal with the Related Cos. and Sterling Equities to redevelop a large industrial swath of land at Willets Point, in a plan that now calls for housing to be built as a third step with a groundbreaking by 2025, according to people familiar with the matter. The companies would first spend years building a hotel and a large retail center in the area before moving on to constructing the housing in an unproven and polluted site near Citi Field.

At Atlantic Yards, the project's centerpiece basketball arena is nearing completion. But developer Forest City Ratner Cos. has yet to begin any of the 6,400 units of housing it once anticipated being built by 2016—2,250 of which would be for low- and middle-income families. Forest City has cited higher than expected costs and an inclement market, although it plans to break ground this year on its first building with 175 below-market-rate units.

The delays have frustrated officials and given fuel to critics of the project, which went through a contested public approval process before the recession.
Posted by Queens Crapper at 12:21 AM

The poorer folk
get f----d in the tookas as usual.

Who can afford any housing in NYC these days, unless you can find space
(after a long wait) in some aging crime ridden low income housing project.

At least it looks like the Macedonia African Methodist Episcopal Church's affordable housing is going up on Muni lot #1 in Flushing.

There's a construction fence already around the site with a back hoe poised near the entrance.

Have you anything against "Negroes" getting back some land that was stolen from them in the early 1950s?

Do we detect some bigotry here?

Eminent domain was used as a pretext to evict a long standing African American community from the heart of Flushing (then located on Muni Lot #1) to build the "Bland Houses".

Of course the Bland projects were built elsewhere....in a much less desirable location....close to an industrial zone by the river.

It is only fitting and proper that restitution now be made to the Macedonia AME Church
for grabbing some of their land
over a half century ago.

Do you have a problem with that?

Or do you prefer some shady Chinese firm to build there instead?