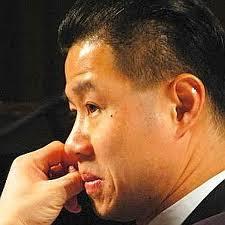 The First Dept of the New York State Court of Appeals crapped on John Liu. Essentially they said that Liu can not just make up a prevailing wage to help out his union supporters and so the prevailing wage for movers in the City may not be set by the Comptroller in this manner.

they don't typically admonish a Government Official but they wrote:

"We find that the Comptroller's use of Local 814's collective bargaining agreement as the sole basis for determining the prevailing wage schedule was arbitrary, capricious, and lacked a rational basis

"And, as noted earlier, no matter what statistical method is chosen - average, median or mode - the survey results reveal figures substantially lower than the wages chosen by the Comptroller.

By ignoring the data from his own survey and instead blindly adopting Local 814's rates, the Comptroller failed to comply with the statutory mandate to determine the wage "to be prevailing" (Labor Law § 230[6]), meaning the actual prevailing wage (see Matter of Action Elec. Contr. Co. v Goldin, 64 NY2d 213 [1984] [annulling Comptroller's prevailing wage determination because it was based on arbitrary and irrational interpretation of statute]).

The Comptroller's exclusive reliance on a labor union agreement that does not reflect wages that are actually prevailing was arbitrary and capricious.

"Where, as here, the union contract contains wage rates grossly disproportionate to the other data collected, the Comptroller cannot blindly use the 30% rule while ignoring the other data."
Posted by Queens Crapper at 12:06 AM

i agree with the court ,even though it is difficult to navigate the legalese in the statment.

Shady dealings are par for the course
for the cousin of criminal Tommy Huang and the son of another criminal Joseph Liu!

Johnny boy isn't looking as cocky
as he used to these days.

Speaking of which...
he might have to be dealing with a cellmate named Bubba soon.

From what we hear...
Bubba loves little rice queens.

Congratulations to Queens Crap. Ya made it to 5,000,000!!! Thanks for keeping it real. Keep up the great work. You are making a difference.

Mr. Controller is out of control, so make sure we boot his butt out of office, even if never see prison, like his friendly campaign manager is going to see.