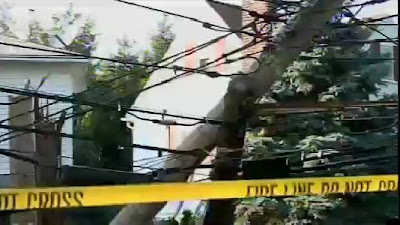 In the streets of Little Neck, just north of Northern Boulevard, high winds caused a number of trees to fall.

A number of power lines were also downed, and at least one was seen shooting sparks into the air.

Residents who were at home at the time say the storm was quick but violent.

Little Neck Parkway was closed to traffic between 3:30 to 4 p.m. but has since reopened.

Here's a slideshow of the damage.
Posted by Queens Crapper at 2:21 AM

That storm was short lived but it was wicked. Screwed up the LIRR big time.

"Any natural phenomenon, i.e., any event which occurs without human participation, is the metaphysically given, and could not have occurred differently or failed to occur; any phenomenon involving human action is the man-made, and could have been different. For example, a flood occurring in an uninhabited land, is the metaphysically given; a dam built to contain the flood water, is the man-made; if the builders miscalculate and the dam breaks, the disaster is metaphysical in its origin, but intensified by man in its consequences. To correct the situation, men must obey nature by studying the causes and potentialities of the flood, then command nature by building better flood controls.


“The Metaphysical Versus the Man-Made,”
-Ayn Rand, Philosophy: Who Needs It

Ayn Rand is actually dumber than I thought she was.

Manhasset is trashed the worst, No electric, trees blocking the street, its so bad the news trucks cant even get in.
Despite this The Town of North Hempstead (Democrats) sent all the work force to Great Neck.
I had to climb of a 8 foot mountain of trees & boats + walk 3 miles up a mountain with a wagon to get generator gas on Northern Blvd Great Neck.

--Dam Racist Democrats are really sticking it to us and taking care of there own.
Big Cocktail party and barn fire in Bayview tonight

"Screwed up the LIRR big time"

Yeah I saw that, there were fences, lawn furniture, dogs, trees all over the tracks in both Necks and Manhasset.
I saw what looked like a rope hangin out the sky and before I knew the treed disappeared in this fog and a blast of wind knocked me and the front door into the house. This was followed by an even harder blast wind, rain and ice cubes flooded into the house.
The wind and ice cubes started billowing the living room bay window.
I then grabbed the carpet end next to me on the floor and rolled up. A second or 2 later the window went it all sounded like a freight train and lasted maybe a minute and a half.

Lots of BBQ's and partys tonight, all the foods going bad. Trying to clear a path to get some kegs and ice in.