Why is Cuomo delaying Shulman prosecution? 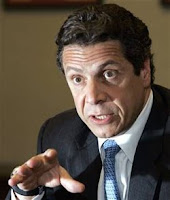 From the Wall Street Journal via Willets Point United:

Queens property owners battling Mayor Michael Bloomberg's effort to redevelop the area near Citi Field are accusing Attorney General Andrew Cuomo of dragging his feet in a yearlong investigation into whether a city-funded corporation broke state law by lobbying for the plan.

The controversy surrounding the Flushing Willets Point Corona Local Development Corp. has exposed friction between aides to Mr. Bloomberg and Mr. Cuomo over how quickly the city handed over documents to state investigators.

In a June 17 letter reviewed by The Wall Street Journal, the Willets Point property owners demanded Mr. Cuomo, who is running for governor, respond to their allegation that the corporation, led by former Queens Borough President Claire Shulman, conducted an extensive lobbying effort in violation of state law. Ms. Shulman denied any wrongdoing in an interview.

"We're getting a little frustrated on what's taking so long and why he's not acting more quickly," said Jerry Antonacci, president of Willets Point United Inc., the group that filed the complaint against Ms. Shulman's corporation.

"There is no reason for a delay in this."

Mr. Antonacci said he believes politics might be at play because, in his view, it's an open-shut case. "I do feel there's some behind-the-door politicking going on," he said. "That's what I feel in my gut."

Ms. Shulman's corporation received hundreds of thousands of dollars in both public and private money to build support for Mr. Bloomberg's plan. State law prohibits local development corporations, such as the Ms. Shulman's, from attempting to "influence legislation by propaganda or otherwise."

"We did everything in good faith and we continue to believe that," Ms. Shulman said. "It's a good project," she added, referring to the mayor's plans for the area. Ms. Shulman admitted she and her group engaged in lobbying.

"Did we go to speak to members of the City Council? Yes, we did," she said. "We hired lobbyists."

She's admitting the illegal activity for crying out loud! Stuff her ass in the pokey, pronto!
Posted by Queens Crapper at 12:15 AM

Let's not forget the NY Mets fundraiser with a special appearance by Ed Kranepool as posted by QC in April:

If Bloomberg funneled the government money to her knowing it was for lobbying, then why shouldn't he go to prison as well?

If it was not for lobbying then what on earth was it for?

Mayor and his buddy Mort Zukerman will dig up some skeletons and have Cuomo crucified in the media.

Bloomberg runs the media via remote control, the Kosher Nostra stick together and protect each other like the army.

City Council, for real? Halloran is so scared of the CB that if Kelty farts the carbon monoxide will kill him. City Council Ha..

Bloomberg is the biggest phony in politics and theres a lot of competition out there in that title.

Shulman probably has the goods on daddy Mario as well as Andy and their whole mafia linked family.

That's why Shulman gets a get out of jail free card.

They've all been in cahoots together going back to the old corrupt Donald Manes era!