Did Hiram fly off the handle at church? 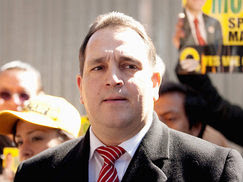 Disgraced former state Sen. Hiram Monserrate is petitioning to get on the ballot for Assembly in Queens - and one of the candidates running for the job says the ousted lawmaker got in his face about it.

"I have seen Hiram and his people out petitioning,” Democrat Francisco Moya, who’s trying to get elected in the 39th Assembly District, told me.

On Sunday, June 13, “two of his volunteers showed up at my church while I was petitioning with my father,” Moya said. “They proceeded to accost us by yelling and screaming obscenities in front of a church on Sunday. And then he showed up and jumped right in with them. At a church on Sunday. Some things never change."

Moya, who's in government affairs for Cablevision, was handing out campaign literature near his Corona church, St. Leo’s, when he said Monserrate’s volunteers started badgering him, obstructing him as he tried to distribute his lit and talk to voters.

Then he said Monserrate himself showed up and spoke harshly to him before backing off and heading into a nearby store.

Yeah but isn't it also kind of low class to be petitioning at a church on Sunday?
Posted by Queens Crapper at 1:04 AM

Instead of running for office,he should just run.....beat it you lisping fat bastid!

That low life should just lay low, like six feet under? = )

It's legal to do a petition drive on the public sidewalks outside of a church, or a strip club for that matter.

Whether it's morally right to do so depends, I suppose, on your morality.

Interfering with the petition drive -- that I don't think is a protected activity.

"I suppose, on your morality."

I didn't see that word in the Websters Politician Dictionary.

After reading up on Mr. Moya - St Leo's appears to have been the church he grew up in and where he later started an afterschool program. I am not sure there is anything wrong with getting parishioners that you grew up with to sign your petition as long as you are acting respectfully. I just don't see anything "immoral" about asking church-goers that have known you your whole life to sign your petition.

In fact It would be immoral not to do everything you can to stop someone like Hiram Monseratte from ever becoming a tax-payer funded state official again. Stopping Monseratte is the single most important thing that anyone in our community can do this summer. The guys career should sleep with the fishes.

I really hope that a defeat would be the final nail in the coffin of his career.

It looks like Moya took a cliche playbook from some hack group such as the parkside. yes lets focus on the publics perception of hirams temper. i hope people see through this nonsense. I go to church in bayside where i live and i believe in redemption and i also believe that hiram lost his career because the dems in state senate had a vendetta against him for flipping to the republicans briefly and tookof a bad situation he got himself in. i wish the best for hiram. after all he served our country. he should be treated better.

Regardless of petitioning in front of your own church and fellow parishioners, it appears Monserrate is like a bad oder that just won't go away and fails to understand that his past actions speak for themselfs and the community he represented is much smarter than he ever expected. This creep simply won't go away and cannot believe he is vilified for his conviction.

Worse, Congressman Crowley the Democratic party Boss who anoints all candidates in his area, discovered and endorsed Monserrate for office in the first place. So now you know where the links were and they are now coming full circle with Rep under investigation for fund raising $$. It's interesting to know how much $$ were raised and spent on races for himself and the Dem club candidate and what happen the the remaining $$. They say Rep Crowley lives in an exclusive area of Northern Virginia with private schools that are very costly. It's afar cry from living in the East Bronx or Jackson Heights?

Hiram Monseratte is a punk. Any
"man" that puts his hands a lady like he did isn't a real man. Only idiots would vote for this jackoff.

Church raffles are sold outside of churches, with Rectory permission, & people can collect signatures to place people on a ballot, as long as they're not on church property, so what's the problem. The fact that MonsterRAT showed up & acted his true self, shouldn't be a surprise to anyone. WAKE-UP residents of Corona, Jackson Heights & Elmhurst who are taken in by this jerk & his so called lying promises, wake up and vote in the negative against him. Please, I don't want this idiot back in Albany. He's a jackass.

i think victims of domestic violence should surround him and do what they will...he's got some nerve - he's a fat stupid pig

I am surprised Hiram got within ten feet of a church, I thought it would be like Holy Water and vampires.