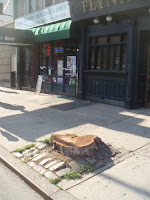 A healthy tree located on Queens Blvd (bet. 43rd and 44th streets) was mysteriously cut down about two weeks ago. Many alarmed Sunnyside residents are now beginning to ask why.

The mature tree was located outside of Foxy’s and the now-vacant Flynn’s Inn.

Workers at Foxy’s said that many people have come into their diner wanting to know what happened to it. The workers said New York City cut it down, but were not sure of the reason. The manager said that she was disappointed that it occured, since it offered a shady spot for residents. She, too, said the tree was in good health.

Now Sunnyside is left with an ugly stump. What happened to the neighborhood’s beautification plans?

It may have been the Asian long-horned beetle. Once it's infested, the tree's gotta go. Of course it also may have been Parks Dept incompetence.
Posted by Queens Crapper at 12:00 AM

Get a stump grinder and then plant a new tree.How hard is that?

Ahhh, a new symbol of "progress" for Queens.