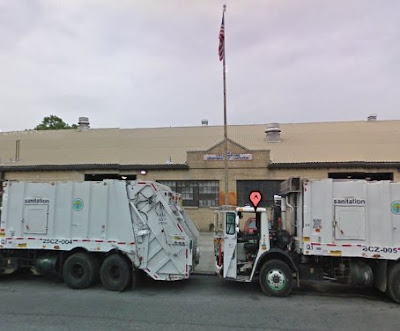 The Department of Sanitation garage at the Queens West 1 facility has not kept pace with the enormous growth of the community it serves.

“We need a larger garage,” DSNY Queens West Borough Chief Douglas Marsiglia said at the June meeting of the Queens borough cabinet. “The community would love for us to move, and we would love to move from there.” Located at 34-28 21st St. on city-owned property in Long Island City near the Ravenswood Playground, Queens West 1 lies within Community Board 1 and has 46 collection trucks, nine mechanical sweepers and 10 salt spreaders assigned to it. There are also 121 DSNY workers at the garage.

Marsiglia told Borough President Helen Marshall, that DSNY is presently seeking a new location that meets both district and community needs. “No site has been identified, so far,” Marsiglia said.

Salt used to melt snow and ice during the winter months is stored year-round at 43-02 Vernon Blvd. in Community Board 2 for use in Queens West 1 at an outdoor facility that is covered by a tarp. Marsiglia said the agreement for that location, part of the Silvercup development site, may be revoked at any time. “We’ve been there for a number of years,” he said. However, remaining depends on “what [Silvercup Studios] wants to do with their land”. A $1 billion complex of soundstages, offices and apartments has been proposed for the land that now houses the Queens West 1 salt pile, the Terra Cotta building and a power generator station.

Shouldn't they have planned for this before the massive upzoning?
Posted by Queens Crapper at 1:19 AM

Helen Marshal did not have the forsight in which she silently stood by while thousands of new housing units and thousands of new illegals living in SRO and basements would eventually overwhelm garbage collections and sites??

Ha never mind garbage. Wait until the air conditioners are going full blast for a few more weeks. There was a power outage around Broadway and Steinway the other night.

Of course they are :( You should see how much garbage the Hindu Temple on Bowne Street puts out every week "The Shree Swamanarian Mandir" Thursday nights they put out about 50 bags or more:( It's mind boggling the crap they put out and the City takes it:( And don't get me started on the ILLEGAL boarding houses and that garbage it's friggin unreal a one family house and all that trash:( But were Vibrant and Diverse:( PATHETIC:(

Western Queens, isnt that Corona part of it ?
Not only illegals are living in basements, trust me legal people (like indians and latinos) are doing the same.
Im one of them (I cant affort to live in a regular appt, because those are special made for illegals in the area where I live, Me? as Im a legal person I have to earn at least 35.000 a year, and how do I do that? if Im a college student??) Im a latina, legal and renting a basement in a private house (that is rented by 15 illegals in the 3rd floor and the bst is divided in half), because cant affort more than that.
The good thing I DONT LIKE KIDS, but trust me, when you understand spanish and see latinos and other minorities in queens -reproducing and pushing themself to live in the last hole in a rented house, it's sad-, trust me I see and hear more than Illegals living in a basement.

There's a shock! Even the street cans overflow after one day..where is it all coming from?