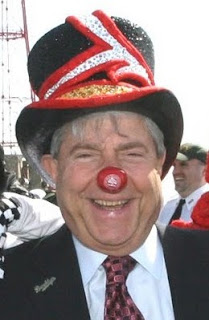 A battle over a controversial amphitheater project in Coney Island has erupted.

Free concerts by the Beach Boys and Neil Sedaka could be canned if activists and a pair of synagogues battling Borough President Marty Markowitz's planned $64 million concert hall have their way.

The synagogues are across the street, and one, the Sea Breeze Jewish Center, holds services three times daily until 10 p.m.

The two sides are due in court June 30. Markowitz's first concert is July 15, with Neil Sedaka.

Markowitz, who is Jewish, took aim at the synagogues and accused them of "shamefully using religion to hold these concerts hostage," to stop the project.

"They should be ashamed. As we say in Yiddish, it is a shonda," he said.

And we have a response...

Brooklyn Borough President should be very ashamed of himself by saying that it is the Jews fault he's in this pickle. That doesn't cut the mustard.

Mr. Markowitz did not follow the Law with the Sound Permitting process. He never filed for a Sound Permit because he would have to perjure himself when filling out the forms. He would never get a permit. Just go to the Parks Dept. website and look for the PDF file on the Sound Permit. All the information is clearly stated.

It has nothing to do with having no complaints about his concerts. Mr. Markowitz was not in compliance with the Laws of NYC. He's a politician that knows about permits etc. He can't do a run around this issue.

He is also fanning the flames for hatred & bigotry with his over the top remarks blaming the synagogues. If it were Schools, Hospitals, Churches, Mosques etc. this NYC administrative Law would apply. He must now take responsibility, by his remarks, if any hate or bias crime is caused by his outrageous words towards these synagogues or congregants.

In addition part of the Sound Permit state that you also need a Permit from Social Services if you are soliciting funds at a event. You can get a seat for $ 5 or $ 10 dollars depending on the concert which is in kind a donation or soliciting of funds that go towards the expense of running a concert. Furthermore there are volunteers (from the Seaside Concerts) who go around with a 5 gallon pail & Marty has asked for people to put in $ 1, or $ 5 or $10 (what ever you can afford) into the pail as a donation. Where are those permits Marty? If a concert draws 2000 or 5000 or even 10,000 people that's a lot of money to account for Marty.

Who accounts for that money?

In conclusion, Marty you are abusing the community, my neighbors, my friends, my fellow congregants.

You are the Shonda.

I've identified Marty to not only be a shonda, but also a schmendrick and a shlemiel (and I'm not even Jewish). One of my readers pointed out that he's also a schmuck.
Posted by Queens Crapper at 1:34 AM

This asshole with another asshole brad lander (who supported Keningston Stables to keep the stalls small without sprinklers) were both in the rally to save the pool and yet all these millions were diverted to this potato chip. I am just relieved neither one of these ugly fuckers took off their shirts.

Marty show us the Sound Permits for the concerts. In addition show us the Permits that allow you to solicit funds ( you know you need a Special Permit for those events ).

You can't & you won't. The NYS Attorney Generals Office should investigate these donations & see what happen to tens of thousands of dollars.

"Marty's" nickname starts witha "p" and rhymes with klutz. (Am not Jewish, either)
Thank God for the Synagogue Activists!

I hope Marty Moose project fails miserably. He's an arrogant bastard who feels he is above the law.

The self-promoter of Brooklyn needs to be humbled. Let's do it.

That's a perfect picture of Marty.

As former BP Howard Golden called him ...a real buffon.

I rest my case.

These old people are fulla shit.
From what I understand the Jewish place was residential and changed their tune --having prayer services (so they can bitch)AFTER they herd of concerts.
To add any "Amplified sound" (speakers) are far over over 500 feet away.
If they still want to live in the stone age, avoiding music, females, elevators, food, cars, heat and electricity on certain days and times why not move back to Palestine or someplace.
Some of these old strict Jewish people are a real pain in the ass !
I'm with Marty on this.
I was on WNYC with him some months back.
From the stage's FOH system including Monitors are over 750-1000 feet from ANYTHING.
Amplified sound is measured from the point of the speaker output to zone X. NOT a door, entrance gate, wall or parking lot.

Its no wonder these people been kicked out of every country on earth !

BTW a good 24 + channel FOH sound system with monitors costs over $3000-8,000 a night to setup and run not including lights, electricians and back line tech's
...Donation $$ is a drop in the bucket.

Can't see why these people are despised for insisting that the Brooklyn Borough President obey the law. Also, "Free" concerts at a place costing upwards of $64 Million dollars aren't exactly "Free". People don't have a lot of money to "spare" these days. 64 Million Dollars isn't pocket change and the City can't afford it.

Joe, you're a farkakte. But I love you anyway.

It's "verkakte" George, and BTW everybody loves me.

Some say you can spell it either way. Yiddish is a derivative of German. "Yiddish" ("Jewish"), pronounced in English as written, actually is spelled "Jüdisch" in German, pronounced "yoodish".

Anyway, Yiddish, the Germanic derivative, is written using the Hebrew alphabet. So what is pronounced "verkakte/farkakte" has to be spelled using the Roman alphabet. Some spell it "verkakte" and some "farkakte". The "ver" has a more Germanic appearance whereas the "far" separates the Yiddishkeit from the German, in my humble opinion. I prefer using the "far" spelling since it heightens the "bite" of the Yiddish dialect/language.

Gabeesh? And I, and everybody, do still indeed love you.

Your bigotry and hateful response does not deserve the dignity of a response, but I'll do so, regardless.

1. Jews have been kicked out from most places on Earth, but not because of their religious practices, as you imply.
2. I don't know where your "facts" came from, but: "live in the stone age, avoiding music, females, elevators, food, cars, heat and electricity on certain days and times" is quite wrong. Jews benefit from heat and electricity 24/7/365, just like anyone else. Observant Jews do not hang out with the opposite gender. There is much Jewish music out there, too.
3. The Quakers eschew modern conveniences far more than do Jews. How come you don't call for them, too, to go back to Germany (Deutsch)?

Could it be you're simply a run-of-the-mill Jew-hater and your "reasons" were simply fallacious excuses to attempt to "justify" your dislike of Jews, the vast majority of whom you have never seen?

As to the story at hand, I think there are many good reasons why this "Potato Chip" is inappropriate and should not be built. QC is great; thanks, Mr. QC.

No its the people in the Jewish center that are the racists and bigots for pushing there religious BS on everybody, silencing people right to freedom and prosperity (in this case sitting in a park and listening to music)
Who the F_ made these people god ?

If it were Isak Perelman & Pinchas Zukerman performing a duet they would be singing a different tune. Marty is booking a Beach Boys concert not Black Sabbeth