This guy understands tweeding when he sees it

Doug Biviano is running for Assembly in Brooklyn, but this is worth a read. 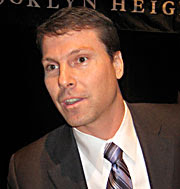 Despite warnings over the last decade of the dangers of a dysfunctional and corrupt Albany, New Yorkers re-elected almost every incumbent running for office. Now we must live with not only a broken government, but, worse, the busted state economy caused by it. In this coming year, our children will sit in more overcrowded classrooms. Seventy-five senior centers will be cut, firehouses closed, and doctors cut from hospitals where any one of us could wind-up in an emergency. Thousands more jobs will be lost.

All of us are badly affected by these government cuts, but our local elected officials who are responsible have perfected a re-election system that always gets them re-elected. They get off scot-free.

My opponent, Assemblywoman Joan Millman, and her colleagues have built local support by annually distributing millions in tax revenue to schools, senior centers, parks and other nonprofits that provide vital services to our community. This “member item” system keeps huge blocks of voters under incumbents’ thumbs — and lobbyists and party insiders keep the contributions flowing.

Coupled with the state’s arcane election law, it is virtually impossible for challengers to win. Legally complicated by design, election law is used by the incumbents to throw hundreds of challengers off the ballot, resulting in 98 percent being re-elected no matter how bad of a job they are doing, no matter how badly they hurt us and the state.
Posted by Queens Crapper at 12:43 AM

Go Doug, father of four children. what is so terrible about wanting to keep firehouses Open? I will vote for Doug.