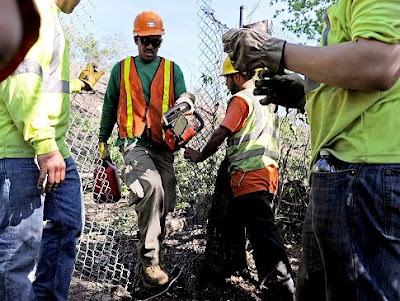 Amtrak's controversial clearing of trees along its tracks in Woodside has begun again - much to the dismay of some locals who thought their objections had halted the project for good.

The federally owned rail company's "Stimulus Tree Cutting Program" razed patches of forest along its property in Woodside last month to reduce the impact of fallen trees and branches.

Amtrak officials told the Daily News last week that the project was finished in Woodside. But bulldozers returned Friday and continued cutting trees on the other side of the tracks.

The additional clearing by the railroad has local elected officials steamed.

"We were outraged when this happened the first time, then we were promised this wouldn't happen again," said City Councilman Peter Vallone Jr. (D-Astoria), who has sent a letter to the company asking why there was no environmental review. "Now it's beyond outrage."

"If you look up 'incompetent bureaucrat' in the dictionary, there is a picture of Amtrak," Vallone said, adding that the company razed trees so far from the tracks that they could not plausibly have been a hazard.

President Obama also received a letter from Vallone.
Posted by Queens Crapper at 1:20 AM

"If you look up 'incompetent bureaucrat' in the dictionary, there is a picture of Amtrak," Vallone said

And if you look up the word "tweeder" in the dictionary, you'll find a picture of Vallone!

How about all the tree cutting on the Grand Central.

What is happening there?!?!

YOU MORONS bought houses next to train tracks....so SHUT UP

its their trees you didn't pay for them

1) Who do you think funds Amtrak? Taxpayers. So we did pay for them. We also paid to have them cut down and have every right to criticize them for doing it.

2) Trees make the air you breathe.

3) Who are you to call anyone a moron?

You mean VAllone can't do more than write a fucking letter?

Maybe if Vallone tried to do something more than a letter, he would get someone upset at the Federal level. They might investigate his empire in Asstoria.

The idiots here are Vallone and the neighborhood folks who think Amtrak is the problem. The railroad right-of-way is not supposed to be forest habitat. If the neighborhood wants trees-- plant them at street level and maintain them.

You don't seem to understand that Amtrak said they were not cutting down any more trees and would plant new ones to replace what they already destroyed. So I guess the trees can stay there.