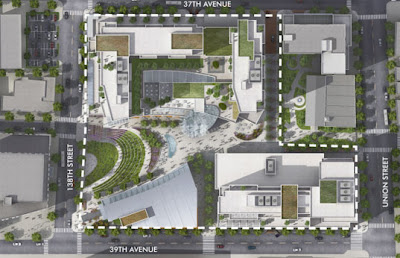 Human remains from a 19th-century Methodist graveyard may still be buried beneath a Flushing parking lot slated for a controversial development, a Daily News investigation has found.

Research suggests 150 parishioners were interred between 1846 and 1857 at the proposed site of Flushing Commons, a housing and retail complex to be voted on today by the City Planning Commission.

An environmental impact statement for the plan noted that attempts to excavate the Methodist burial ground - near 37th Ave. and 138th St. - in the 1950s reportedly were unsuccessful.

Still, church leaders at the time did not consider that conclusive.

It's unclear how the possibility of graves - unknown to even the project's fiercest opponents before The News' digging - may impact the contentious project.

The city has already ordered archeological testing before work on Flushing Commons, believing artifacts or graves from another congregation may still be present.

But critics wonder if graves are scattered throughout the 5-acre site, given that the Methodist graveyard went undetected for so long.

Opponents of the project also stoked speculation about graves where the nearby Macedonia AME Church wants to erect affordable housing.

Historic newspaper reports seem to verify Macedonia's stance that the parishioners buried in the former graveyard were reinterred beneath the church.

But two sources close to the plans contended the church excluded a basement in its affordable housing component due to fears that crews might unearth bodies and halt or delay work.

Um, it was known to the projects fiercest opponents. It was mentioned at the farce of a hearing by several testifiers. But nothing is sacred anymore in the city that never stops building.
Posted by Queens Crapper at 12:36 AM

From my understanding, burial grounds can be legally exhumed and reinterred in an appropriate mass grave or structure 100 years after the burial of the last body. The problem is locating every body in unmarked graves such as this.

It didn't stop them from desecrating the graves in St. George's in Astoria.

His earth is back in Tennesee

This project is all about laundering money out of China. The same developer has Queens Crossing accross the street, and it is a bomb, open offices closed sores and a poor food court. This is going to fail.