Nice try, but Vernon Blvd is not in Queens Plaza 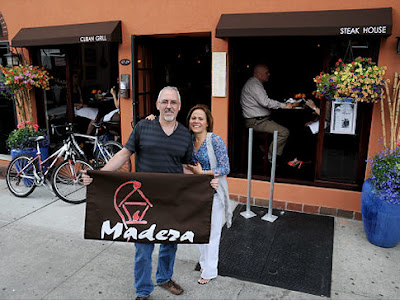 A business-friendly neighborhood that locals have dubbed the "new Manhattan" is thriving in Long Island City.

The area around Queens Plaza, a once-grungy transit hub at the base of the Queensboro Bridge, has emerged as an unlikely mecca for small businesses, buoyed by a face-lift of the streetscape and a building boom of luxury condos.

Despite the Great Recession, the area has become fertile ground for mom-and-pop merchants, many of whom have opened shop this year.

A key tipping point seems to be the construction of the Gotham Center mixed-use tower, which replaced the drab municipal parking garage on Queens Plaza.

Owners of fledgling businesses also said the influx of residents from Manhattan, the relocation of office workers - notably from JetBlue and the city Department of Health - and the loosening grip of the economic downturn have created the perfect environment for local startups.

"It's a critical mass," said Gayle Baron, the executive director of the Long Island City Business Improvement District. "Retailers are interested in investing in this community."

I was trying to figure out where the pictured establishment is in Queens Plaza, because I pass through there on a regular basis and have not seen it. The article continues:

A large number of merchants have set up shop over the past year on Vernon Blvd. and Jackson Ave., including Madera Cuban Grill, Testaccio Ristorante, Little Closets, Matted, Dutch Kills and the Burger Garage.

That's a mile away, but what's distance when you are shilling for real estate interests?
Posted by Queens Crapper at 1:34 AM

Yes thats right its no where near Queens Plaza. These righteous little yuppies are just dying to actually add more congestion with their future plans eventually right next to the bridge.
Its got it all with the clean air, smooth roads, and tons of parking.

Maybe there is some great space close to 21st st under the bridge. How the pseudo ingenuity predictably spins when a real estate yuppie sees dollar signs.

And what is with these condo idiots with their windows or curtains open to the platform of Queens boro plaza?
No one cares about your life.

What the hell are they smoking?

It agree that it was a poorly written article, but appreciate the sentiment. Vernon has got some very nice resturants and bars and Madera is a very welcome newcomer (was there two weeks ago). I live in FH and wish we had venues of this type.

But honestly, "the new manhattan"...come on. I keep hearing this for every pseudo luxury coop that gets put up in Queens and Brooklyn. Why not appreciate Queens for what it is. I love it all the same.

Hey when do the strip joints open up again around there?

I can't wait for that park to open in the middle of the plaza, across from the millstones. Ah, the serenity of overhead screeching subway wheels and fragrance of tailpipe exhaust! The winos are already making bench reservations.

They have lost their marbles and I hope the Bloods from Queensbridge kill them all.

I have to admit the Gothom Center is a game changer for the Plaza area. I saw it rise so quickly and now see it as perhaps the missing piece of the puzzle that pushes Queens Plaza into a better place. It certainly helps all of the surround new buildings sell their units.

I can't say the Queensbridge Projects will change anytime soon and will be a thorn in the side of the area. I wish everything well there and improve and hope the traditional long time homeowners and non-project residents benefit as much as possible/

How are the millstones coming along?

Funny how they quote the George n Jerry show while the press ignores the vast majority of the neighbhorhoood.

Funny how Jimmy Van Bramer (and his nameless minders) remain out of the spotlight while EDC and City Planning continue to beat up the community.

LIC in the last 10 years was built on nothing BUT lies and greed.

A culture of greed.

Exactly WHY this city was attacked twice but radical fundamentalists.