LIC lot is still a dump 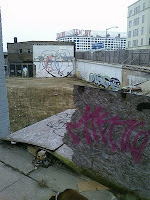 This property is still here and still a dump - 45-64 Pearson Street, Long Island City. The DOB was notified. The developer received more violations, but still doesn't care. There are $21,000 in default violations and 4 more coming up in a hearing. The DOB keeps giving these animals chances. Look at the notes the DOB has posted on their site - it's all crap. These guys are taking advantage of a neighborhood they don't live in and don't respect. They have a big violation for illegal zoning. It should be used for residential use not a dump, a storage area or parking, but the city allows it. It is still a haven for rats and other vermin. They have a hearing in July. I know they won't show up. They won't pay the city and this eyesore/dump won't be gone. This city loves to ticket and tow parking scofflaws, but when it comes to these developers they let them get away with everything. The DOB is a joke and this city is a joke.

The Concerned Long Island City Native
Posted by Queens Crapper at 12:00 AM

Another piece of crap by Scarano.

Another piece of crap by City Planning.

Another piece of crap owned by Hymie.