Jim Gerson's Resignation Statement
I was the first Chair of the Flushing BID upon its formation in 2004. I was born in Elmhurst and lived there for 14 years. Through three generations and for over 50 years my family has owned a building in downtown Flushing. I care deeply about Flushing, and have come to understand its needs-particularly of its small business community. Therefore, I take my responsibility to the merchants and property owners of Flushing very seriously.

The BID faced its first serious and controversial issue when confronted with the impact of the construction of Flushing Commons. My approach was to offer three resolutions which were approved by the BID Board of Directors.

Since that time the developer has lobbied extensively to emasculate these objectives with City agencies and Board members. The result has been that a previously harmonious board became highly factionalized and dysfunctional. One direct impact was the resignation of our highly competent and well liked executive director who supported these objectives but was becoming increasingly marginalized as a result.

The precipitating event for my resignation as Chairman of the BID was the Board’s decision last week to turn down my proposal for an independent analysis of the economic impact of construction on area merchants; and rely instead on the highly questionable representations of the staff of council member Koo that such a study could be conducted by either his office or by EDC.

At that point it became clear to me that I could be more candid and more effective advancing what I believe in, by working with other community groups outside of the confines of the BID. I have no confidence that a study conducted by the same people who are proposing and/or supporting the current unrealistic plans will be either fair or helpful.

I believe the impact of Flushing Commons as presently proposed will be devastating to local businesses especially during the evening hours. Just as in most other metropolitan areas or neighborhoods, there is a core focus which draws people and supports the non-core businesses. In the case of Flushing I believe the core is the quantity and variety of reasonably priced ethnic food (not unlike other "Chinatowns" around the world). These restaurants depend heavily on affordable parking. Affordable parking is the most important key to keeping Flushing vibrant.

During the day Flushing will lose their customers in one of two ways. Gridlock will frustrate some. Others will go to shop in nearby malls or other areas where parking is free. Flushing Commons, as now conceived by TDC, is as unsustainable a project as anyone could imagine. It needs to be thoroughly altered so that the interests of the small businesses of Flushing and its neighboring communities are maintained. 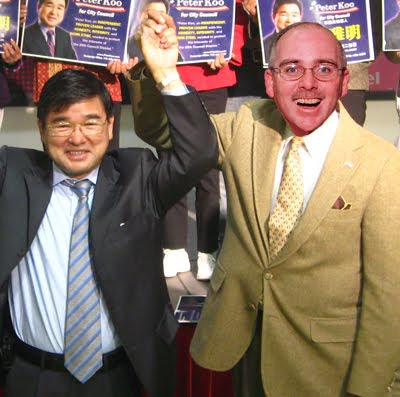 You can read an analysis of this event here.
Posted by Queens Crapper at 12:37 AM

Bravo Jim for your hard work in trying to make Flushing a better place in which to live and work!

Now that the BID has been subverted into becoming a sham to do Wellington Chen's, Michael Lee's, Michael Meyers' and C.M. Koo's bidding...you've made the right choice in joining the ranks of those fighting this latest monstrous example of ongoing political corruption in Flushing....WHICH INCLUDES COMMUNITY BOARD 7!

Why does C.M. Koo find it necessary to be still using former councilman/convicted rapist Dennis P. Gallagher as an "adviser"?

Dump the c.M. next election.

And C.M. Dan Halloran...stay in your own district and stop kissing Peter Koo's ass!

I hope Gerson exposes Shulman and her cohorts!

Actually more importantly is to bring in the feds to scope Wellington Chen's ass!

He's the link to much more and predates Shulman's current corrupt involvement.

The "Little Duke of Wellington" has been working scurrilously behind the scenes, for about 3 decades, selling out Flushing and it's surrounding environs to overseas Taiwanese interests!

And why not? That's what makes this diminutive pimple a powerhouse.

He sits on some rather prestigious boards...like The Metropolitan Museum of Art.

Maybe he's gotten some hefty Asian donations thrown their way to buy his seat there!

Good for him. He should quit. We need a young person with fresh idea to come on board.

Why should he have to quit in order for that to happen? He's not that old, and Mabel Law is gone now as well.

Yeah I think quitting is the worst thing that could happen. What once existed as a roadblock is now gone.

FYI: did you know Wellington Chen is also on the board of trustees for Baruch College?