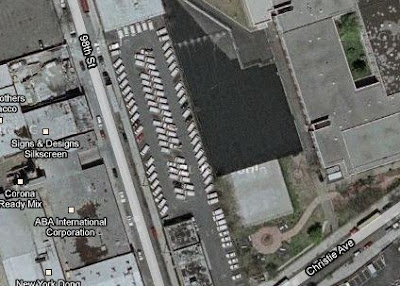 A QUEENS community with some of the city's most overcrowded schools is slated for some sorely-needed relief.

The city has found sites for three new elementary schools in Corona - which could add more than 1,800 seats to the burgeoning district.

Community Board 4 has scheduled a hearing today on the newest proposed school, an 800-seat facility to be located at the site of a parking lot at 98th St. between 50th and Christie Aves.

"The overcrowding has just become enormous. We've never had this much of a kindergarten waiting list," said Nick Comaianni, president of Community Education Council 24, which oversees the area. But "there's not a lot of locations, especially in Corona, for us to build schools."

[That's funny. While Nick Comaianni was busy shoving schools down Maspeth's throat for Corona's anchor babies, someone found 3 sites in Corona for schools...]

Corona's Public School 143 has the city's longest kindergarten waiting list. About 110 students are hoping for a spot.

You and I are stuck with the infrastructure costs paid from our taxes.

I bet if we got rid of all the illegals in Corona, we'd have empty schools.

wow, so this just tells me here in maspeth, all of those kids will one day popping over here for middle school.. wtf! they need to build k-8 and high schools in corona..

It's about time Corona started building schools for all their illegal aliens and anchor babies. It costs too much to bus all of them to neighboring schools who have also been feeling the crunch of overcrowding. Kids should go to school in their own neighborhood.

wow, so this just tells me here in maspeth, all of those kids will one day popping over here for middle school.. wtf! they need to build k-8 and high schools in corona..

Not to worry. Most will drop out after 5th grade. That elementary school diploma will be the pride of the whole family!

Think about all the anchor babies whose parents have no idea that Kindergarten exists. There should probably be 1100 kids on the waiting list.

if the kids go to school in their own neighborhoods, how will the bus companies make enough money to kick back to the pols?

It's nice of the new owners to add American movies to their theater. Fifty years ago it had only American movies and now we're thought of as an also added attraction. What's happening to America.

It's true what one of the other anonymous said. All these illegal immigrants coming to the US. For what? To do the same thing that they do from they're country! Ok, let my know if I'm right or wrong. If your coming to this country illegally! (I'm not condoning illegal immigration.) Don't you want to better yourself? Why don't you do us Americans a favor. Go back where you came from! There has to be good schools out there. Not only in the US. We also got to thank the government for this. Instead of arresting and deporting them. They reward them with jobs, food stamps and medicaid. Then the government wonders why the economy is so bad! DUH! WHAT HAS THIS WORLD COME TOO! SMH!