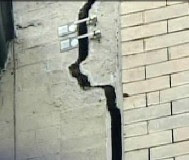 The crack between 273 and 275 Mott Street starts near the roof and shoots down more than 20 feet. It's a few inches wide already, and city officials want to know if all the rain is forcing the split even wider.

A complaint prompted firefighters to evacuate residents of 16 apartments in the two walk-up buildings for more than three hours.

A Sushi restaurant and clothing store were also evacuated during what should have been the busiest and most profitable part of the day.

Back on Mott Street, inspectors are giving the building a clean bill of health. The crack has been here on the facade for years and sensors are already installed to monitor whether it's widening. Just after nine, everyone was allowed back inside.

Don't know about you, but there's no way I would go back inside that building with a crack that wide...
Posted by Queens Crapper at 12:15 AM

The problem is people don't have the money to go elsewhere. At least this crack resulted from aging, we have more people whose homes are being anihillated by nearby construction and no one compensates them either.

If you follow that crack downward you'll spot Bloomberg's asshole!

"Don't know about you, but there's no way I would go back inside that building with a crack that wide..."

But, DOB inspectors don't ever have to go back inside.

So, for enough cash, they'll write down whatever the bribe-giver wishes.

So what if people die?

People die every day from something. Why not a building collapse?

Where does the building owner live?