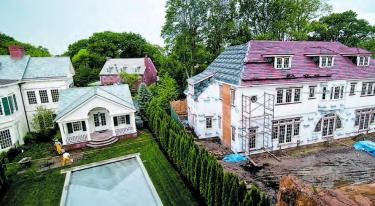 This is a follow-up to the story about the 17-acre forest in Riverdale razed for McMansions.

Villanova Heights’ first two homes are complete and up for sale. The development has been criticized and delayed by neighbors who battled against its reshaping the landscape of the highest hillside in Riverdale, a part of the Special Natural Area District. Others protested the imposition of what they saw as oversized McMansions hard by a historic district with grand homes of its own.

The new homes, an 11,135- square-foot French Norman and 11,870-square-foot Colonial Revival, were erected on a 17- acre lot — once dense with trees — on Iselin Avenue and West 250th Street. They are among the largest homes in Riverdale.

The mansions’ size still bothers some Fieldston residents, who fear they are out of step with the appearance of the Tudors and colonials in the exclusive neighborhood, many of which were designed by Dwight James Baum.

“Whether or not you like the size of the houses, they are very, very, very big and dwarf everything else in the neighborhood,” said Charles Moerdler, chairman of the Community Board 8’s land use committee and former commissioner of the city’s buildings department, who said complaints from locals have indeed diminished. “It does have some wonderful advantages in terms of providing people the opportunity to have a McMansion, but I’m not sure that’s what the area was designed for.”

Six months have passed with no buyers. The original Chapel Farm house is up for sale as well:

Under a unique arrangement, the mansion is being offered as a lease-hold sale for approximately 200 years. It is being shown by private appointment by exclusive broker, Ellen Feld of Sotheby’s International Realty...the asking price is $15,000,000. Taxes are $34,000.
Posted by Queens Crapper at 12:50 AM

Oh those spoiled Riverdale folk having to live with a fraction of the ills we face daily in Queens.

Maybe they ought to consider a name change...."Mc Mansionville" and conduct bus tours.

I once suggested this for Malba's "Don Cheechland" section...that's chock full of full of ostentatious "Guinea whoppers"!

If I win megamillions I'll buy that Chapel Farm house!