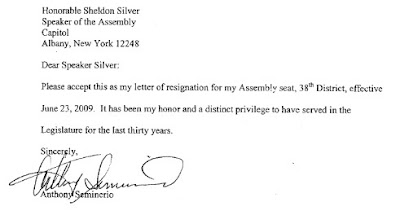 A few names that have come up in conversation with people familiar with the district (there are both Democrats and Republicans in this list):

Former City Council and state Senate candidate Al Baldeo (I'm not sure if he meets the one-year residency requirement); Community Board 9's Nick Comaianni; Seminerio's son, who ran for City Council in 2001 and was briefly mentioned as a candidate for former Councilman Dennis Gallagher's seat (now held by Democratic Councilwoman Elizabeth Crowley); Donna Marie Caltabiano, director of the Forest Park Senior Center; and - here's a wild card - Matt Gorton, an aide to Mayor Bloomberg.
Posted by Queens Crapper at 4:37 PM

Please, not Seminerio's son. We already have too many local dynasties.

Who better than to follow Der Fuhrer's orders blindly and without question?

More corruption? What a surprise!

Heyyyyyyy, Matt is a nice guy! Do not like Bloomberg, but Matt is okay!

Matt Gorton once stated, when asked why the City doesn't do more to crack down on illegal apartments:

"But where would all the people living in them go?"

Oh, I don't know, Matt. How about in one of the bazillion legal units constructed during the Bloomberg regime?

This foul-mouthed lazy imbecile cannot walk across the street without asking permission and assistance from the Commissar.

So, count on the Commi$$ar using his "influence".

So, on September 15, let's show this moron and his master that we have all the influence.

Albert Baldeo is using an address of a friend in order to run for the seat... he uses a fake address... he is a crook

So what? It worked for Espada.

matt does not live in the district. his parents do.

your right go for it baldeo first city council, then senate, and now assembly, I think you should try to join a community board first and have REAL community involvement... next he will run on the federal level.. Congress,,, what a joke.... but Democratic Party does owe him a favor,,, who knows... I wonder if he will run without his picture again?? mmmmm Spanish, white, black who knows... much like his community involvement a big question mark

Baldeo's a joke. Rumor is he takes $ from illegals under the guise of helping them obtain legal status and the does nothing. When they complain he threatens to turn them in to immigration.

What about Joe Crowley making a deal with Baldeo to bow out of the Senate race, promising him backing for a possible assembly seat that would be opening up, three days prior to Seminerio getting busted publicly. Do you think there was inside info? AAAAHHHHAAAAAAAA

Nick Comaianni is a real person. A family man from the neighborhood. Maybe it's about time for a real change. Could you imagine someone who has the community's interest at heart, instead of his own for a change.

Matt is Bloomberg's door mat...
a proven dumb-ass yes man to the Commissar!

They don't do squat.

You're just using them as your personal flack-hacks!

Not a fan of Baldeo but he is registered to vote at an address of a home he is the owner of. Whether he actually lives there or not ought to be easily ascertainable by those who need to know.

What about Gary Giordano?

Pretty sure both Ognibene and Giordano live in Hevesi's district.

We might all be better by no one filling that seat. If you think Seminerio was corrupt, just wait for Baldeo to get into the mix. His picture is next to Snake Oil Salesman in the dictionary (the "thats not really in the dictionary" is not necessary).

I don't know that Baldeo needs to do this. Or take these nasty insults. Stop your mean attacks on the guy. He is a decent family man, who shares a vision for the community, which I cannot say the same for the others you mention.

Giordano definitly lives in Seminario's district (unless he moved recently.)

Baldeo is a joke. He doesn't live in the District. He lives in South Ozone Park. Just look at where his kid goes to school. He doesn't give a damn about any of the issues in our neighborhoods.

His main goal is to be the first West-Indian to be elected to office. I've heard him say that. He is an egomaniacal goon who will sell out his mother for elected office. Just ask his wife.