Many unhappy with postal change 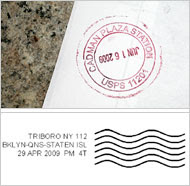 For decades, stamps on letters mailed in New York City have generally been canceled with squiggly lines of ink and the name of the sender’s home borough. But this tradition may itself soon be canceled, at least in Brooklyn and Queens and on Staten Island.

Under the Postal Service’s plan, most mail from the three boroughs would be sent to a central processing center in East New York, Brooklyn, where it would be branded with a new emblem:

The plan was spawned because of a 29 percent decline in the volume of first-class mail over the past decade. Officials say the change would save $6.7 million annually.

A host of elected officials, from the relevant borough presidents to New York’s two United States senators, has decried the proposal, along with postal union officials who translate a consolidated postmark into lost jobs. And dismay is rippling across this proposed new land called “Triboro,” where many who know about the plan resent the prospect of being stripped of their envelope identifier.

The debate invariably provokes a discussion of the status and hierarchy of the city’s outer regions, home to a mix of proud lifelong residents and immigrants who cleave fiercely to the identity of their piece of New York. It also highlights how differently each borough sees itself from its neighbors and deflates any notion of the boroughs as some sort of ensemble supporting cast to Manhattan. It is, in some ways, reminiscent of the outrage that occurs whenever New York gets a new area code.

They take the Triboro name away from where we want it, and give it to us where we don't.
Posted by Queens Crapper at 12:14 AM

The postal system is a dinosaur awaiting fossilization.

Only official or legal mail need go through its overpriced, byzantine system.

I use e-mail and UPS or Fed Ex for packages without subjecting myself to long lines and the many Chinese postal clerks that are dominating my area who can barely speak English.

Yep...they've taken over the post office too it seems.

Traditionally working for the PO used to be a very secure (yet extremely boring) civil service job.

Perfectly tailored for obedient follow the letter of the written regulations Asian-Communist mentality.

Won't everyone be surprised as their "solid" jobs are slowly eliminated by progress.

No...let's go back to those grand old nostalgic days of the "Pony Express" (tee-hee) and wait two months to have a valentine card from my sweetheart delivered to me!

The world's moving faster, lads & lassies, and so should the mail!

What a small thing to argue about. Cancellation is only one part of mail automation, and they're consolidating that part of the operation. Manhattan's been cancelling The Bronx's mail for ages.

Wait until they start consolidating (more) processing plants. There are over a dozen in the Tri-State NY Metro District.

They should take the money they save and use it to build more bike lanes.

Big deal. letters have a return address that shows where you live anyway.

Is this another Queens Crap-endorsed "important" issue we're supposed to care about?

It's an excerpt from an article which relates to Queens. Do you have a problem with me posting it?