Trib: Bloomberg will not stop gassing until all geese dead 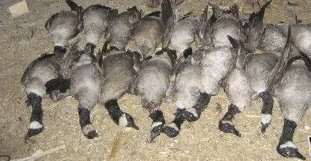 ...teams will sweep City parks within a five mile radius of the airports, rounding up all the Canada geese during their flightless molting season until the end of July. The birds will then be taken to an offsite area where they will be euthanized in carbon dioxide chambers.

According to Bannerman, 2,000 geese isn’t the cut-off mark. The City hopes to remove all geese within the five mile radius.

I clarified with the reporter what exactly Bannerman was referring to:

"Do you mean more gassing? Or by other methods."

And his response was:

"All gas, all the time. I specifically asked if any would be relocated or anything other than gassed. Got a definite no."
Posted by Queens Crapper at 2:41 PM

And Crowley added, while we're at it, we're gonna round up the Queens Crap readers who have made fun of me and my best bud Bloomie. We just have to reduce the numbers. Nothing personal. You're all toast!!!

Attention all animal lovers and animal rights activists -- Make sure you stop Bloomberg in the next election. He doesn't care about anyone or anything but himself. If you get in his way, he'll take your property by eminent domain or exterminate you.

"he'll take your property by eminent domain or exterminate you."

How true! I remember when the west nile virus outbreak was discovered 10 years ago here in north Queens. What did Mayor Giuliani do at that time? He tried to kill all of the mosquitoes with toxic pesticides that may have caused more health problems to the human population than the virus would have caused.

Knee jerk reactions to environmental problems are not the answer. As many suggested from earlier posts, there are more solutions that are humane to address the problem of geese populations near airports. These despots (Giuliani & Bloomberg) show no regard for life, human or otherwise. Imagine the nightmare that would be New York if those bozos are governor and mayor respectively.

Get rid of them all, and our elected officials-- both do nothing but crap on us anyway,

When you read about the Commissar's Final Solution for the geese, are you also reminded of the beast who tossed her lover's kitten into the oven to roast to death?

When criminals such as the Commissar Death and Taxes take to killing helpless creatures (rather than taking steps to simply drive them away with odors, sounds, etc.) you know what he and his lickspittles plan for the likes of pests like taxpaying voters.

Let's drive this madman out of town on September 15.

Let me be the first to point out that geese can fly. They are killing the geese that are there now, as if other geese can't come and take their place.

Bloomberg will face his Maker at his appointed time as we all shall.

AND HE WILL PAY DEARLY THEN FOR WHAT HE'S DONE!

This privileged billionaire won't be able to buy his way out of the LAST JUDGMENT...with "T" bills, stock options, silver, gold, rubies, emeralds, diamonds or an offering of real estate holdings!

He shall stand naked before his Creator, all 5'7" of him, begging for mercy.

His passage won't be easy.

Animal Expert suggested, "They are killing the geese that are there now, as if other geese can't come and take their place." I have an even greater concern. What if something unexpected comes here to fill the void? Did anyone actually think this through? If the city breaks the food chain cycle, are there going to be consequences? It doesn't seem to me that Mayor Bloomtard is looking out for our best interests. Any thoughts?

What makes me nervous is the city has "carbon dioxide chambers". When were these built and for what reason?

What the hell is with you people? The geese are pests. If rats were the size of dogs and sashayed around in big groups crapping often and everywhere, you'd protect them?

Yes they can fly... but for some reason, a subset of the species decided a (human) generation ago to stop migrating. Probably because we have enough garbage around to feed them all year long.

The fewer of them, the better.

"What the hell is with you people? The geese are pests. If rats were the size of dogs and sashayed around in big groups crapping often and everywhere, you'd protect them?"

The point is there are better ways to manage them without killing them. If we could find a way to do that with rats, I would be in favor of that method as well. With all the exterminating we do for rats, there sure seem to be a lot of them around. They are even in the park outside City Hall. This goose killing spree will do nothing to reduce the population if non-lethal preventive methods will not be employed.

I don't understand all the uproar about the geese that basically are "new" to this area. In the past as they were migrating &they'd touch down for a while.They're not a native species to Queens,but were a protected species,found the living easy here,eating garbage and pooping all over the place.....sections of Flusing Meadows resemble a cow pasture--they make king sized bird doo do.Home owners in Floral Park were fed up with all the big mess from them and couldn't even chase them away as they were...a....protected....species....that overbred.
Only other way to humanely destroy them would be by chopping their heads off which most definitely would upset many,but probably IS more humane to fowl.
..and maybe "they" upset the established balance of nature" as canadian geese are not native to queens,etc.

"Only other way to humanely destroy them"

Your problem is that you believe they need to be destroyed when other methods are more successful in driving them away.

1) egg addling
2) making habitat inhospitable to them (i.e. have hawks and dogs chase them away)
3) native-born geese are not the ones that brought that plane down, it was migratory geese, and having both engines go out at the same time was a complete fluke that will likely never be repeated. There has never been an aviation fatality in New York due to geese. Therefore we are going WAY overboard on this, but that's what we do.

Canada Geese eat grass, not garbage. Maybe idiots should stop feeding them bread in the park.

Once again an overreaction by an insensitive and obtuse mayor gone wild. The emperor has no clothes! Tony Avella for mayor!!!

If Der Furher Bloomberg has his way he'd make soap out of them too!

You sure he's not a reincarnated Himmler (former chicken farmer later promoted to a high ranking 3rd Reich exterminator)?

Goose down for bedding anyone?

Sorry there's no gold teeth to extract from these fowl to help balance NYC's budget!

What the hell is with you people? The geese are pests. If rats were the size of dogs and sashayed around in big groups crapping often and everywhere, you'd protect them?

The fewer of them, the better.

It appears that many folks do not know how much damage and pests these critters are - as beautiful as they appear - they are not small like ducks - they are a bit vicious and S**T large, frequently and every where - they polute water habitats and grounf water. The ones you see today are the lazy ones whom decided not to return to Canada!

No one likes a dead one, but something immediate needs to be done. A prevention policy should then be implimented to induce these birds not to stay. Perhaps we can send them to LI - perferably the Hamptons to fertilize the lawns there.

lets clear something up - these geese that you say decided not to fly to canada where in fact captive bread in the 70's to provide hunting fodder - when that didnt work out they stayed. the problem is man made, now theres a surprise. the geese that took down the plane were migratory - almost a different species. and equally almost as a freak event. the reason is people dont like them on there lawns that they over fertilize and pollute our waters with!
whether you like them or not is not the issue, the issue is ethics - its wrong to kill things becuase they get in your way - its a bad example to our children and our neighbors. and as someone else pointed out its a waste of money as they'll be back.
Learn to live with them, they do less harm in poluting waters than us humans.

Cruelty to animals by an inhumane bastard known as Bloomie. He's also sac-religious. Won't he be Gloomie if he doesn't win the election???? Imagine how much positive publicity if he would have transported them elsewhere and spared innocent lives.

Geese are NOT pests. AT the very least, these geese can feed a starving African nation for F*&%K's sake!

The mayor can now take his place along with other notorious animal abusers like Michael Vick.Think about it ,if any person harmed these birds in any fashion we would be subject to criminal prosecution under the law.Instead he has used the law as a weapon against our innocent wildlife and tries to justify his refusal to use non lethal methods of population control.His only solution was gassing them to death.This is nothing more then abuse of power and legalized animal cruelty. Shame on you.

I live near Oakland Lake in Bayside,Queens part of the 5 mile radius of the airports.The lake is now The Dead Zone.The resident geese who lived here for many years were gassed to death,under Bloombergs orders.NYC is a town without pity .We gave him the right to govern, Never the right to﻿ Kill.Technology exists today to avoid bird strikes.This will not be tolerated by New Yorkers .Vote him out of office in November. This city has suffered enough death and sorrow the past eight years and this is the final blow.