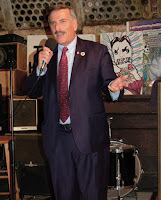 The Yippie Museum in Manhattan played host Monday night to what was easily the most bizarre, uncomfortable, yet endearing fund-raising event of the political season.

In a bid to spice up his personal image, the typically strait-laced City Councilman David Weprin (D-Hollis) tried his hand at stand-up comedy, yukking it up for a brief five minutes as the marquee event at the Bleecker Street club.

“A few years ago I told my twins, who were 14 at the time, that I was running for comptroller,” Weprin said to open his set. “They said, ‘Daddy, are you running for controller of the house?’ I told them, ‘No, I’m running for an office I can actually win.’”