So many schools and not enough time 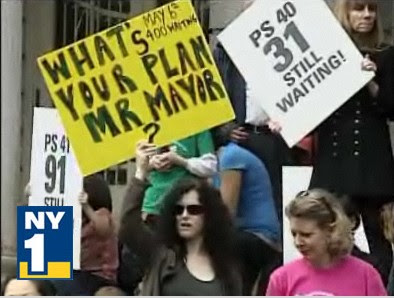 As part of a $13 billion capital plan just completed, DOE officials say school seats are being created faster than any time since the 1930s and the demand keeps evolving.

"We will still need 25,000 new seats in addition to the 63,000 new seats to continue to relieve overcrowding," says [the SCA's Sharon] Greenberger.

The SCA admits in the past population shifts were not foreseen and developers were not required to include schools in their plans, but that is going to change.

"We are working with developers throughout the city right now who have big plans, and are insisting that we begin talking with them about school mitigation, to make sure that we anticipate school needs before the students are there," says Greenberger.

It is a new tactic in a shifting educational landscape.

And then there was a follow up report, where this gem was dropped:

"We try to identify sites that are large enough to accommodate a school, that pass environmental due diligence, that are accessible and are clearly in an area where there's need," says Greenberger.

Which is exactly the opposite of what they did in Maspeth.
Posted by Queens Crapper at 12:27 AM

"The SCA admits in the past population shifts were not foreseen and developers were not required to include schools in their plans, but that is going to change."

How is that going to change?

Is the Commissar going to station people at our borders to ask who is "migrating" to NYC, how many kids, and what plans for additional kids?

It is his loathsome "sanctuary city" policy that is killing our schools and disrupting education by filling classes with non-English speakers and kids from a country where education is ridiculed. Where schools are looked at as drug markets.

Deport the illegals and watch how the "need for additional seats" is reduced by probably 90+%.

Especially, now, then millions are losing their jobs. We have no need for people who are "willing to do the work that Americans refuse".

Hasn't that by now proved to be a crock?

Oh, yeah! Let's also use September 15 to deport the Commissar to Boston. Unless he prefers Bermuda so he can pal around with the terrorists.

September 15 can be the day we solve a bunch of our problems created by this Commissar.