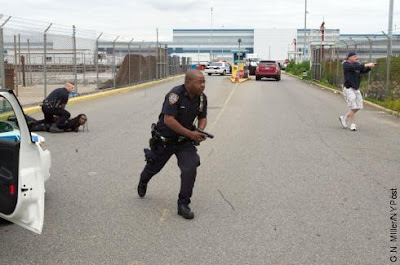 Five French tourists were taken on a hair-raising, seven-mile "ride from hell" yesterday when an illegal van picked up the unsuspecting passengers at JFK Airport and raced through two boroughs to try to shake cops, authorities said.

The nightmare began about 11 a.m. when Esther and her mother, Claudie, 60, also a Parisian, and Gwen and her parents, Michele, 60 and Jean-Jacques, 62, who live near Bordeaux, got off an Air France flight.

A Port Authority source said Ian McFarland, 57 -- who was at JFK steering tourists to illegal vans -- sent the two families to a vehicle driven by Khaalis Preacher, 27, at the Air France terminal.

PA cops recognized McFarland as a longtime "steerer" and Officer Michael Bestany reached inside the van to try to grab the keys, the source said.

The driver floored it, knocking Bestany to the ground.

With cops right behind, the driver roared west along the Belt Parkway and onto Linden Boulevard, forcing other cars to get out of the way.

It then snaked through residential streets, went in circles and crashed through the mechanical gate arm of a US Postal Service facility on Forbell Street in East New York.

Preacher and McFarland jumped out with the van still moving. It slammed into a postal truck.

Cops with guns drawn quickly arrested the two men.
Posted by Queens Crapper at 6:43 AM

As far as I am concerned the French tourists should receive the key to the city for being put through that.

I hope that the tourism agencies were in prompt touch offering apologies, assistance and a few comps.

Sorry but this made me laugh. Welcome to New York!

What the third anonymous commenter said.

"F the French." - Shocked that QueensCrappers would post that!

Let me guess... you are angry about how "liberal" the French are, or maybe hold a grudge for some wartime decisions that you don't remember nor understand, but feel the need to carry on because your underachieving bitter parents did the same thing?

Or maybe it's simply because you are ignorant and hateful grouches.

This city needs tourists more than ever. Thanks to you anti-everything psychos, tourism is about the only thing this city has left to offer. Now you want to bash the people who come to spend money here and want to enjoy this great City?

Oh Crappy- your blog is surely a beacon for free thinking American values. God Bless you and your flannel robe wearing followers.

Such f'ing idiots, honestly. You will fade away like most other fundamentalist groups, or maybe you'll even find a little spot somewhere in middle America- like the Amish and the Mormons. Hopefully sooner than later.

F-Crappy and the white trash regime!

No actually, putting all our eggs in the construction and tourism baskets is what got us in this predicament in the first place. Now we have no money for essential services, not that those were ever a priority for this mayor.

"Thanks to you anti-everything psychos, tourism is about the only thing this city has left to offer."

Yes, the flannel robe brigade are the ones who drove manufacturing and the middle class out of the City.

"F the French." - Shocked that QueensCrappers would post that!

Or maybe it's simply because you are ignorant and hateful grouches.

F-Crappy and the white trash regime!

So you're generalizing the entire population of Queens Crap readers based on one comment you don't like? Do you do this on every blog or just this one? Because if you go to the Daily News website, or Curbed, or Gothamist, or any site that allows comments, you will find thoughts, some inspiring, some insightful and some stupid. I think it's hilarious that you would respond to this comment with the same type of generalization that offended you so much in the first place.

And you're one of the folks who thinks he's better than us?

F-the French, HOW DUMB CAN YOU GET? OH, YES, DUMB AND DUMBER.

How dare anyone insult Queens crap? Who is this anonymous person? I will crap in his/her mouth. i have a heavy load for disposal

Yet another example of the Vibrant! Diverse! Exciting! Queens that Terrible Terri blathers.

Yet another example of the drug dens of Corona, the message parlours of Flushing, and the generally sleazy night life of (Hello George!) Astoria.

I heard the wild ride didn't horrify them as much as all the Queens Crap they drove past.

Let me gues,the perps were nigs and they were just starting to turn their lives around.HAHAHAHAHAHAHA

"Let me gues,the perps were nigs and they were just starting to turn their lives around.HAHAHAHAHAHAHA"

Let ME guess... you are lower middle class white trash (while completely oblivious to it) that likes to use cop terms like "perps" "skell" and "on the job."
Makes you feel like you are part of the club right?

I'll go out on a limb and guess that you also watch Hannity religiously and probably think your Indian neighbors come from the same place as the people who hit the towers.

I am a classic Queens crapper and my family was kicking the butt of tinpot kings and dictators generations ago while yours was still living in a world not far removed from a brutish ox cart existance.

They signed documents at great moments of history, contributed and created stunning examples of art, and generally dedicated their lives to making this place a better place for all.

So let me dish back to you your own medicine.

A 'spic' could be a surgeon that saves my life, a 'sambo' could be an attorney that protects my repuatinn, and this 'Crapper Archie' could be someone who pounds your sorry ass back into the mud from wence it came.

I dunno. President Sarkozy of France vacationed in 2007 at Lake Winnipesaukee in New Hampshire.

Have you ever vacationed there? Even I haven't.

Let me guess..........I consider myself middle class.I'm a retired pd Lt. I call it as i see it. I dealt with those savages for 20 years,and was born in this city. There is a difference between a nigger and a black person.I know it,you obviously don't.I won't resort to name calling,i don't know you,but if want to survive in this this city,you might want to get a little thicker skin.P.s.I am not a Hannity fan.Like most of the media folk,either left or right, they tend to forego the truth unless it fits their agenda.

How funny was my throwaway comment, "F the french" that it caused 15 comments? LMAO!!!!! I am FRENCH!

There indeed is a difference between a "nigger and a black person". I have pontificated on it extensively. Man, did I get heat on the topic.

georgetheatheist said...
This comment has been removed by the author.
Wednesday, June 24, 2009

Neither "Nigger" nor "Poor White Trash" belong on public forums for the same reason--they validate the Plantation system and slavery.

If you did not own 90% of the land and enslave thousands in antebellum South you were probably a small farmer eaking out a living on depleted land, i.e. "Poor White Trash."

If you were an African man or woman kidnapped from your home, tortured, terrorized, maimed and made to work without just compensation, you were a "Nigger."

Why are we so proud of kidnappers, murders, thieves, torturers and rapists, just because they have money and elegant manners?

Mark Twain made the point in Huck Finn when all the townspeople fawned over the ersatz "Duke and Dauphine," after all they fawned over the plantation owners too and their character wasn't much better.

I am a lower middle class person, i.e. "working class." My family never stole a penny from anyone, nor do I. I am not impressed with racists or those who elevate themselves above others because they have a few pennies more.

Here we go again. A story that deals with illegal vans operating out of the airports which should have raised issues about what the authorities are doing to prevent this type of illegal activity which poses danger to tourists and citizens alike dissolves into a nauseating shitfling over who's a bigger racist. You guys have chips the size of redwoods on you shoulders.