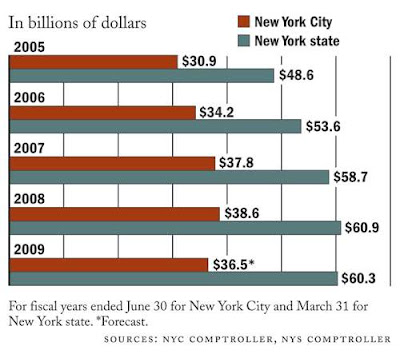 Mayor Bloomberg is considering awarding thousands of city managers $52 million in raises he withheld last year, The Post has learned.

Sources said the mayor's decision last year to withhold the bumps led to an upside-down salary structure in some agencies, where unionized workers who received hikes now make more than their bosses.

Last year, when the unions received an 8 percent wage hike over two years, the mayor said he couldn't afford the same increase for managers.

He is buying his illegal 3rd term with our money and we will have to pay these debts for years after he end his 12th year. please die bloomberg

Who the hell but the NYC taxpayers should be paying the campaign staff of the Commissar?

Out of his own pocket when we're just standing here ready to pay?

Let's cut this dwarf's pay to zero on September 15.

Let's cut this dwarf's pay to zero on September 15.

A dollar saved is a dollar earned!

Under this mayor more and more non-managerial union workers make only the minimum and need these raises.

Also under this mayor are the increase of managerial positions (patronage at its best, Anthony Como?, average managerial pay, and huge merit raises for managers.

Haven't y'all heard? What's good for the goose...

believe me, the vast majority of managers in the city are those who have earned it. don't let the nepotism and favors that make the headlines mislead you. becoming a manager in the city is no different than if you were in private industry. the unionized staff in my office make well more than i do because they eat up so much overtime. it doesn't matter how many extra hours i put in...none of it gets compensated.

BULLSHIT...overtime is only for certain positions. I'd say well over 95% of non-uniformed civil servants never get a whiff of overtime in the last ten years

O/T isn't only for certain positions. I don't know where your facts are from, but I believe over 5% get the chance to work O/T if needed. The comment above specifically stated one office rather than all city workers. It is well documented how many staffers do make more annually than their superiors. I totally agree there.