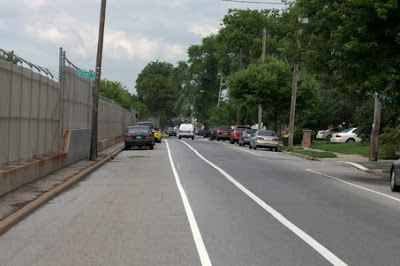 The Advance did report earlier this month on the plan to add 5 miles of bicycle lanes around the island: "... and the cost of painting the markings is covered by federal funds that can't be diverted to other uses". Huh?

Let me get this right. On one hand we build a fence to keep boulevard joggers from harm. At the same time we encourage bicyclists to zigzag through island traffic. Those mystical chevron patterns must be the key. Like protective talismans, these magical symbols would extend a protective shield around the two-wheeled that bravely venture into the land of the four-wheeled. Phooey!

And where did the Feds get this money? Don't we have more pressing matters to throw our tax money at? Like health care, perchance? Highway improvements, perhaps? Education, possibly? Forget fixing potholes, those ain't a Federal problem.

This is "part of Mayor Michael Bloomberg's PlaNYC 2030 initiative, which includes getting New Yorkers to exercise." Has this billionaire buffoon lost his mind? Fix our roads, transit, schools, and healthcare first; before pulling this health-nuttiness on us. How healthy is it to be hit by a car, has Hizzoner ever been here on the Island to see our traffic?

Curiously, the bike lane appears to have been painted on the wrong side of the street on the North Railroad side (heading toward Tottenville) - the bike lane is on the LEFT side of the roadway. The bike lane on the outbound South Railroad is on the RIGHT side (which, upon giving due consideration, appears to be the correct side). So, why this sudden directional shift? "The routes are part of the citywide master plan ..." of course, a master plan, that explains it perfectly! Third term, anyone? Anyone? Anyone?

Oh well this has to just be a bike hater saying this. Let's see what the local pols have to say...

"I wish the same time and ingenuity went into securing Staten Island a second paving crew," Oddo said. "We don't see the point in bike lanes when our streets aren't drivable."

"We need to secure the foundation of Staten Island's roads first," Ignizio said, pointing to smoother roads or the addition of left-turn bays, "before going ahead with the luxuries. No one is biking to work from my district to Manhattan."
Posted by Queens Crapper at 12:05 AM

Make sure you wear your federally approved feflective vest.

Yes, because, we must condemn Staten Islanders to be dependent on driving forever. God forbid we consider anything else.

I almost got run over by a free wheeling cyclist in SoHo yesterday who brazenly plowed through his red light while I was crossing the street on my green light!

I'm 30 years old and quite nimble so I was able to sidestep just in time to avoid being knocked down.

So how about testing all legal age cyclists who use city streets...insurance and registration required too...and license plates on their bikes!

These are, after all, potentially dangerous transportation vehicles.

And it wouldn't be a bad idea to require finger printing and photo ID cards to be worn by bike messengers.

Yes, because, we must condemn Staten Islanders to be dependent on driving forever.
---

What is wrong with street cars or busses?

Nothing! What's wrong with bicycling?

When the DOT interposed them on Bay Street, critics cried that the meandering bike routes were, at best, a waste of money. The fact that it took only months for the pounding of traffic to just about wear away the paint in spots only compounded the skepticism.

Now the city is adding more routes, this time on North and South Railroad avenues, and the reaction is edging toward disbelief.

A critic of the North and South Railroad bike lanes and routes told the Advance, "They claim they don't have the money to fix the roads but they have plenty of money to paint lines for bicycle lanes all over the Island."

A DOT crew painted bike symbols on South Railroad yesterday afternoon, along a stretch that includes a bike lane set apart from the driving lane. Farther along South Railroad, on a narrower section between Tysens Lane and Guyon Avenue in Oakwood, chevrons form a shared route similar to Bay Street's.

More bike routes, whether Staten Island likes them or not


Lets learn from the past. Busses replaced bikes when people fround them impractical 100 years ago.

There are very few plans for actual bike lanes on Staten Island, only "shared routes".

Please do some fact checking and don't echo the idiots at the Advance who got shared routes and actual bike lanes confused..

(for the record, I don't support shared route markings on staten island, but I do support bike lanes on some streets in staten island)

This is another stupid idea. Spend money on bike lanes?

Get a life or at least a better line of BS!