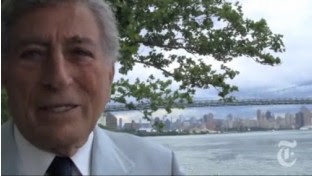 Tony Bennett sings about leaving his heart in San Francisco. But when he talks, it seems to have remained in Astoria, the western Queens neighborhood where he grew up.

“The finest place to live,” Mr. Bennett, 82, said as he showed a reporter his favorite haunts. “I’ve been all over the world — Paris and Florence and Capri — and yet I come back here and I like this better than any place I’ve ever lived.”

Mr. Bennett lives on West 57th Street in Manhattan now, but visits his old neighborhood regularly, and it seems to transport him back in time to when he’d stare longingly at the shimmering skyline of Manhattan across the East River. It is only a 15-minute subway ride away, but to a young Anthony Dominick Benedetto, the son of an Italian immigrant grocer, it loomed large and distant like Oz.

At the end of the video, he says he likes the fact that there are no skyscrapers where he grew up. He didn't say anything about the Queens Crap.
Posted by Queens Crapper at 11:13 AM

God Bless him. He is a real class act as well as a great talent. Very few have had the extended success that he has enjoyed.

tony bennett is a true astorian..
started out in Riccardo's catering, as a singing waiter.. it's amazing he still loves astoria...

grew up in astoria too but moved to maspeth when i had my first son. love astoria, but love maspeth too... would love it more if lizzy was out and the damn pigeon lady......oh and if they stop the damn h.s....

"There are sensible, functional apartments and homes. I really like it here." - Tony Bennett in the NY Times video.

"I've always been a Democrat. Believe me, we've got to keep the Democrats in". - Tony Bennett at the Democratic National Fundraiser in March

A class act, as opposed to you, George.

Speaking as an old time Astorian, this guy is a phony, believe me, packaged by his son a slick operator. Most of my crowd feel the same way, but what can you do?

My great uncle used to be a bouncer at a club on Queens Plaza and he would show up and got pitched out he was so awful.

Tony B has nothing to do with Astoria, simply is trading on an image. He does nothing for the community, never shows up for anything, and God forbid he donates a dime to the place that put him on the map.

Even the Frank Sinatra HS fund raising was done in Manhattan.

And that name has pissed off a lot of long time residents who think it should be named for a true star of the community, Ethel Merman.

Sinatra was a mobster from Hoboken, a nice image for Astoria, eh? But Tony B is a Rat Pack wannabe and the Valone$ just went along with this farce.

I mean really, do you want your son or daughter to go to a school named after someone who beat up Mia Farrow?

If we can't rename the high school after Astorian Ethel Merman (a Bryant HS alumna), instead of Mr. Rat Pack, we can always rename it after Papa Charlie (the Judge) Vallone.

Why's this liberal shyster "a class act", Mr. Agnostic? Because he wears a pinky ring and has a bouffed hair-do?

georgetheatheist said...
Why's this liberal shyster "a class act", Mr. Agnostic? Because he wears a pinky ring and has a bouffed hair-do?

Maybe it's because of the way that he sings, and conducts himself. You would be wise to conduct yourself in the same way, instead of using this forum to vent your rage at anyone who dares to criticize you.

There comes a time in a man's life, and I've had plenty of them.

Of course Mr. Ignorance (Hey folks, a guy who revels - REVELS - in his stupidity by calling himself an "agnostic") you're a class act. From your comments we know you starch your underwear. You like the stiffness of the cloth between your buttocks.

My caravan moves on. Keep howling.

georgetheatheist said...
Of course Mr. Ignorance (Hey folks, a guy who revels - REVELS - in his stupidity by calling himself an "agnostic") you're a class act. From your comments we know you starch your underwear. You like the stiffness of the cloth between your buttocks.

My caravan moves on. Keep howling.

Of course, all you can do when challenged is call people names.

You know when I make my poo-poo, flies don't come but rather butterflies nest. After I eat asparagus, my streaming wee-wee smells like rose water.

Your classical education has failed you, Georgie.
Correctly, that would be:
"A" Greek for "without" or "un-", "Gnostos" Greek for "known." Hence, not summing to "ignorant" but rather "unknown."

I don't "worship" Rand. I am a student of Rand.

An "agnostic" is a person who doesn't know what the hell is happening and admits it. Dig?

Now don't be a Dummkopf.

An "agnostic" is a person who doesn't know what the hell is happening and admits it. Dig?

Good vs. Evil. Guilt vs. Innocence. Existence vs. Consciousness.

Good vs. Evil. Guilt vs. Innocence. Existence vs. Consciousness.

... and then Nonsense ate itself.