WTC hardhats drinking on the job 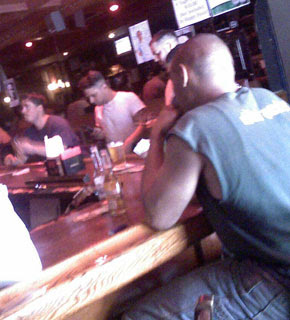 Hard-drinking hard hats at the World Trade Center site have turned their lunch hour into happy hour, pounding beers and shots of hard liquor before returning to work, a Post investigation found.

Dozens of workers belly up to the bar at gin mills on Murray Street -- two blocks from the sacred soil of Ground Zero and America's most scrutinized construction project -- shortly before noon every day.

One group of three workers threw back eight drinks each in less than an hour before returning to the job.

Their power drinking is a violation of the Port Authority's zero-tolerance policy -- and escaped the notice of the agency's safety investigators, who have conducted dozens of sweeps since taking control of Ground Zero construction in 2006.

The Post reports today that two of them were fired.
Posted by Queens Crapper at 12:34 AM

This is disgusting. What has been built as well bloomberg with your great oversight?
Did anybody see the Supreme court just ruled 911 family's cannot sue the Saudi Royal family? That is not over yet, but its likely since James Baker was eager to be the Saudis lawyer against U.S. families of 911 that it wont progress too far.
It was very shady too the way over a hundred Saudi Royal family members were flown out of the U.S. the day after 911.

Hard drinking by hardhats is nothing new but this does not mean that excess like these gus is the norm but rather an extreme exception. Remember that each one of them is exposed to great danger ,hazards on the job site that alcohol and drugs endanger these folks that much more to death and to feloow workers. Laws on the books should address this or enforced rigoriously.

You guys rip immigrant drunks who work on the job but citizens are no better and compensated ten times more money.

This is part of why New York City is crumbling, it is hard to find honest hard workers.

Who said these were citizens? Let's remember that unions hire illegals now!

Look at the pic, they are citizens.

Plus I know a few guys who work down there, I just thought they got shit-faced after they finished their shift.

How can you determine a person's citizenship simply by looking at them? It's quite possible that they are Irish illegals hired by a subcontractor.

Who cares if these assholes are legal or not? They are endangering their lives and the lives of others and stalling a profect that should have been completed in 2005!

we still get those here?

Most likely its polish/slavic/russians who are doing this kind of work these days.

Sometimes you wonder how buldings ever get up--And stay up. Once again, lack of leadership and accountability at the top. Lazy bastards!

That's right it can't be American citizens getting drunk!

It's those illegal hispnaics, illegal immigrant irish, and the illegal slavs, russian, and pollacks.

Stop being Anti-American. In the USA we pay more and never drink on the job like those foreign bastards.

I'm under the affluence of incohol. Ya gotta problem wid dat?

I wish we had built a television tower, which would be self-financing and not adding to office glut while filling our skyline with a graceful spire. Bill Pedersen designed one reasonable proposal, which is the first tower on this page:

To really show who we are, and drive Al Qaeda nuts, we could have topped it with (instead of or in addition to a rotating restaurant) an interfaith chapel. Osama bin Laden would hate the thought of Muslims praying peacefully with other faiths at the very site of his greatest destructive "achievement."

While on that page, check out some of the bold, and often beautiful, designs. Apparently we don't suffer from a lack of inspiration and creativity in this town -- just courage. I wish we'd BUILD things future generations would regard with enough affection that they'd want to landmark them. Instead, it's so often...well, the name of this blog! :)

I worked for a major company involved in building the JFK air train years ago and the drinking was out of control.

I regularly witnessed employees at company-sponsored events hoist a few and get right into company-owned vehicles. Needless to say, I abstained.

This did not help me achieve job success in that environment. Unfortunately drinking has been part of construction culture for at least the last hundred years and will be going forward.

I have to laugh that the Post thought it was news worthy to follow construction workers. Not all of us drink and the ones that do well they seem to have a problem. They really should wait until after work. And as far as the illegals go, they do it too. You should see them on pay day. They get so shit faced that they are like that for days....

Aside from these guys being drunk this site and city had the opportunity to build the worlds tallest building! We had it twice with the Empire State Building and WTC! Regardless of the current regime NYC is still the greatest city in the world and should have THE TALLEST BUILDING in the world!!!!

And let's call it the Tower of Babble!!!

Get to work, you union f*cks!

Since this project started the NYS Workers Comp Board is inundated with injuries - many of them bogus. So many claims that they had to create a new C-2 form for filing. If an employer feels that the claim is bogus, it must be controverted within 30 days.
Now you can see in photographs why these workers are tripping and falling. This goes on every day of the week. Most just buy beer and ice at the deli in the morning and put it in the cooler for lunch.