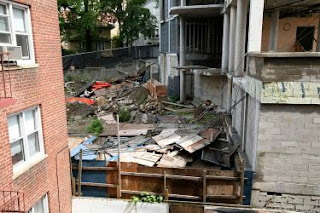 Is there hope on the far horizon for the half-finished tower on Tulfan Terrace?

A new plan is being floated that could, perhaps, lead to the completion of the derelict tower, or its total destruction.

Community Board 8 land use committee chairman Charles Moerdler hopes to bring the city on board with an eventual agreement to back the completion of the building. The city Housing Development Corporation has agreed to consider getting involved in the project, and could help with low-interest loans and bond financing, or, working with the city Department of Housing Preservation and Development, take the structure over and finish building it.

An HDC spokeswoman cautioned that the corporation is still developing its response to stalled development around the city. And while Board 8 considers what to do with the property, the group holding its mortgage — and which may walk away with ownership at the end of ongoing foreclosure proceedings — has plans of its own. One partner says the building would already be complete were it not for the current owners.

And here's what it looked like before the developer bulldozed it.
Posted by Queens Crapper at 12:08 AM