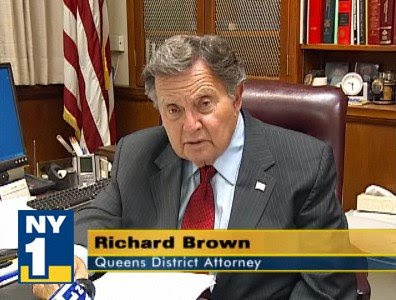 NEW YORK (AP) -- Prosecutors say a 50-year-old man made at least 20 fake emergency calls in the past four months claiming New York City police officers had been shot or were being held hostage.

Alex Rodriguez pleaded not guilty at an arraignment Tuesday to charges of first-degree reckless endangerment and falsely reporting an incident. He faces up to seven years in prison.

Queens District Attorney Richard Brown says the calls were made from pay phones around the city to 911, and an operator was told officers had been shot or injured. But the calls were all fake.

Brown says in one instance, officers speeding to the scene in bad weather were injured when the car crashed.
Posted by Queens Crapper at 12:19 AM

You misspelled his name, its, "A-Hole."

We used to have a Columbian family across the street that had parties - loud block tumping parites that went on to 5 in the morning.

The rest of the block were immigrants and po white trash dormats.

Calls to the precinct got laughed off (got to keep those stats down folks) and 311 served its purpose - a valve for letting off steam.

The only way they could get the cops to show up was to call in 'a man with a gun.'

I kid you not.

Diversity..... Irish, Italians, and Jews still don't know how to spell words in the English language. They should have closed the borders after 1850.

Now that we've established how to spell "Columbia," let's send that creep back there before some severely ill person dies from a delayed ambulance or an accident with an emergency vehicle rocketing toward a bullsh*t emergency.

Perhaps the last poster couldn't spell "Columbia" because he is exhausted from the three jobs he has to work to support the lazy good for nothings who have time to make these retarded calls.

u have to be kidding me, so you had police cars racing to your block thinking that there is someone with a gun when all you have is people making noise? that is unreal...one of two things are gonna happen there a cop or cops is going to be killed or seriously injured or some innocent person may be killed as a result of an accident, in which case im sure you will be the first one to say 'why were they driving so fast on the street'...how bout calling 911 and saying there is a disorderly group of people drinking and playing music, just let it get dispatched to a car...a gun,amazing