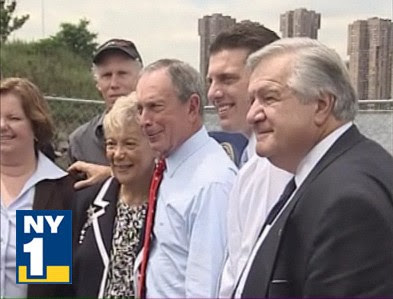 An application to transform Hallets Point in Astoria from dilapidated industrial district into a vibrant residential and retail mecca has been filed.

There is a great deal of public support for the project, which, if approved, would compliment similar recent developments along the Queens and Brooklyn East River waterfront.

“I look forward to the transformation of this underutilized waterfront area into a vibrant community,” said state Senator George Onorato.

The photo caption is: "Renderings of a proposed development project in Hallets Point in Astoria, which would turn the area into a vibrant retail and residential area."

FYI: Jay Valgora is Claire Shulman's favorite architect. He has a rather exciting website...

And over in Hunters Point, per NY1:

A section of Queens that would have been the site of the Olympic Village had the city won its bid to host the games in 2012 will now be converted to affordable housing.

Mayor Michael Bloomberg announced today that the city has acquired 30 acres of land in Hunters Point South to build a massive complex with views of the East River.

"The question is when will it start. [The answer is] this fall, with the infrastructure," said Mayor Michael Bloomberg. "When will it finish, I think that's a function of the marketplace. What we're trying to do is rezone the big parts of the city that need it and whenever the marketplace is there, the developers can go in. We're trying to acquire the land, like in this case, and get the infrastructure in place."

Also in the plans for this development are a school, park land, and retail.

Bloomberg said the city is still looking for a developer for the project.

Interesting definition of what "affordable" is. But then I guess all housing is affordable to someone. Why didn't anyone ask the Doorman why he had a beaming smile if his sister the teacher and brother-in-law the cop still won't be able to live here (since he brought it up first).

Did anyone at the press conference ask Helen where ambulances will take the people who get sick? Did they ask if those pesky financing issues had been worked out?
Posted by Queens Crapper at 12:22 AM

Hmmm........ Are Mike and Helen an item? Check out Doomberg's right hand. Whassup with that? A photo of a gang of thieves, fer sure!

If they're that chummy in front of the camera, I am wondering what it's like when they are behind closed doors??!?!?

Why do you say a teacher and a cop would not be able to afford it? That is just a total mistatement. If anything, the combined incomes may be over the limit and they would have to rent a market-rate apartment. Each alone would make over the minimum. Why do you comment on things that you know nothing about?

This would put them in that bracket - but only if they had a family of four. If not, they don't qualify. When Eric made his statement, his sister and her husband had just gotten married and had no kids. So this isn't for them (and neither is the "inclusionary housing" in Woodside, either, for that matter).

Sounds like they also removed the low income housing from the HPS equation completely.

I didn't say they couldn't afford it. I said they won't be able to live here, which is exactly what you said.

You mean the guidelines for affordable housing exclude the people who need it the most and put unfair caps on young people starting out who make typical middle class base salaries?

Yes and none of the people pictured there gives a shit and the press won't question them about this, either.

Isnt that George Stamatiades, one of the senior members of Community Board 1, Dutch Kills Civic, and the Steinway/Broadway merchants groups?

With a trail of success like that, only someone from western Queens can thrive and repeat their 'magic' again and again unchallenged by civics or newspapers or preservationists.

The teacher and the cop can live there, they just have to pay market rent if they fall out of the income ranges. And the ranges are adjusted by the size of the family, so if they do not have children, adjustments are made. You need to look at the guidelines before making judgments like this.

"The teacher and the cop can live there, they just have to pay market rent if they fall out of the income ranges."

Market rates there are luxury rates which they will not be able to afford.

"And the ranges are adjusted by the size of the family, so if they do not have children, adjustments are made."

Exactly. That's what we've been pointing out. You're not reading the post or the comments correctly. A young couple, just starting out, - a rookie cop and a first year teacher - with no kids who everyone would consider to be "middle class" would not be able to afford to live there. They make too much for the "affordable" rate and not enough for the luxury rate. They simply fall through the cracks.

Is this too hard to comprehend?

What makes you think that people who just start working in the first years of their careers should be entitled to live in these apartments? The purpose is to provide affordability for middle income families, not the lower salary first year workers.

Why did Gioia say that then about his sister and her husband not being able to afford to stay in Queens? Isn't your beef with him and not me? What's wrong with pointing out his inconsistencies and the press' failure to pick up on them? And what's wrong with those just starting to work in the first years of their careers being entitled to live in these apartments? They have studios and 1-bedroom units, too, so I guess the purpose actually isn't "to provide affordability for middle income families" as you say. Is it?

This is all a senseless discussion.

One road access for an additional 50,000 people in the middle of nowhere with no services (yea school, sure - people have been waiting 30 years for schools in parts of Queens).

This is a social disaster waiting to happen. A teeming no go zone avoided by all and mercifully ended by the first cat 3 hurricane that will serious compromise shoddy tower construction on a former marsh.

On then will they be torn down and made into what they should have been: public parkland.

But since the waterfront alliance is made up by developers, and nto community activitists and envirnmentalists, and the little greenies they entice are spineless as they are clueless, we need to go through this unfortunate cycle over the next 50 years.

Who is the woman with 3 chins?They can build a condo on one.

She is Cathy Nolan who also claims there are no plans to roof over the Sunnyside Railyards.