Randi not going out quietly 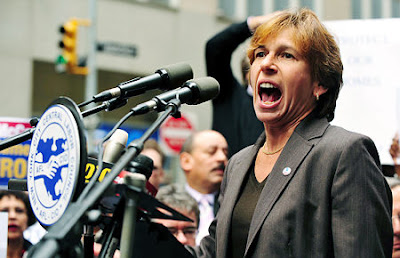 The United Federation of Teachers blocked City Councilman Simcha Felder (D-Brooklyn) from receiving an "early endorsement" from the 1.3 million-member Central Labor Council to get even with him for exposing the union's arm-twisting during a City Hall hearing on charter schools, sources said.

Felder disclosed that union reps brazenly distributed cue cards with prepared questions that legislators were supposed to ask at the April hearing. Union witnesses got the softball questions. The tough queries went to administration officials.

So when the labor council last week released a list of 33 council members it was endorsing without screenings, Felder's name wasn't on it.

"It was because of the cheat sheets," said one source.

And from Room Eight:

Under recently announced deal, the United Federation of Teachers and its members will make the selfless sacrifice of reducing the take home pay of future teachers, not themselves, by 5 percent for 27 years, rather than ten. In exchange the existing teachers, who give up nothing, will work two fewer days per year. This is sure to be the first of many similar deals in the inevitable return to a “you will pretend to work and we will pretend to pay you” school system. This time at a vastly greater cost with higher taxes, and all the additional money going to those who retired to Florida at age when most of us will have to work an additional ten to twelve years. "This agreement is a win for everyone," UFT president Randi Weingarten said. She had called the initial deal a “win for children.”

Under the deal teachers, who previously arrived at school a day or two early to set up for the year, will show up for work unprepared on the same day the students do. Including those who were just hired and never set foot in a classroom before. Unless the school year is changed and two days of instruction are cut.

In reality, the days of instruction are going to be cut anyway. How many days will pass before the teachers provide a competent lesson? How many days before they assign, collect, and go over so the children can learn, homework? Or, let’s say a principal were to ignore the rest of the school and sit in one classroom for the first few weeks, collecting the massive documentation required to actually remove a teacher from their job. How many days, weeks or months would have to pass without any teaching, given the excuse by a teacher that they needed time to prepare for the year, before the UFT would say a fired teacher didn’t have a legitimate case for a grievance?

Photo from the Daily News.
Posted by Queens Crapper at 12:35 AM

Its cute to that Queens Crapper and Room 8 think that there is real teaching going on in NYC public schools, even beofre this new deal was struck witht he UFT. As a graduate of the NYC public school system and a parent of two children who have gone through it, I can tell you that it does not matter how much or how little the teachers are paid. None of the teachers or administrators I have ever spoken to in the last twenty years really cared about the school or the kids in them. They do not believe themselves accountable for the mess that is our schools. They blame it on parents, mayoral control, the kids - anyone but themselves. The teachers and administrators constantly talk about how hard they work and how self sacrificing they are , but it is all crap

Unions are killing this city.

Just yesterday I read an article showing how New York parochial school students significantly outperformed public school students on the standard exams. As much progress as has been made in the public schools, there is still much work to do and I hope the teachers' union doesn't ruin it.

Give Randi credit, she was effective to her union members.

I bet she would have made a mean divorse lawyer!!!

Back when I was a HS teacher I wanted those few days ahead of the kids. Anything I could do ahead of time made things flow more smoothly for all of us. I always wondered why the union focused on money issues when working conditions were the issue for me. Kids go nuts when they see a teacher who is not ready, and a school that is not ready. (But the execs never go above the main floor, anyway.) You need to set up your environment,prepare work, get settled. I actually enjoyed those days. We are all in it together.

Mayoral control doesn't work and Bloomberg has no compassion and only creates fake numbers of his successes. look at the kids, they are dumber than ever.

Yes! With one big factor you seem to be overlooking. Parochial schools can throw kids out of their schools and public schools cannot. Comparing the two is never a fair thing to do.

"Give Randi credit, she was effective to her union members."

Oh yeah? You obviously haven't asked any of the 80,000 teachers in the system.

BTW Crappy, great photo of the sell-out. All mouth, no action.

When people think of organized crime, they think of the Mafia. When I think of organized crime, I immediately think of the United Federation of Teachers. Mind you, I have nothing against teachers. I respect them. I don't respect their Union Officials and reps. They only care about their financial gain and really don't care about the children. They don't do much for their teachers either.

italian girl, She is a major sell out. I guess she join Dyke Quinn on kissing Bloomberg's ass. Shame on her. Bloomberg keeps getting what he wants and WE foot the bill.

Italian Girl said:
"Yes! With one big factor you seem to be overlooking. Parochial schools can throw kids out of their schools and public schools cannot. Comparing the two is never a fair thing to do."

Parochial schools long ago made a determined decision to provide a safe, orderly, environment to educate youngsters.

No parent, priest, or politician can override the decision to dump unruly and ineducable kids.

The public school administration could just as easily decide to do the same.

Create "dumping ground" schools for those who just want to disrupt or refuse to learn.

Within several semesters, the entire parental population would get the message: prepare your kids for school and support the teacher - always.

Accomplishing this is a matter of political will and the determination to educate.

Choosing not to do so permits the "education industry" to perpetually fail and blame it on disruptive "students".

One of the reasons the Commissar allows classes to be filled with illegal aliens who cannot read or write or speak a word of English, is that is his fallback excuse for failing to "manage" this failure.

Dump him, dump the UFT, dump incompetent teachers, empty the "rubber rooms", create "dump schools", eliminate the political propaganda that nowadays passes for study, demand results from the teachers, students and administration, and watch the improvements.

Imitating the reasons for parochial school success is NOT "bringing religion into the classroom". It is determination to educate students.

Does it feel good to go down in history as the biggest sell-out the UFT has ever had??

they used to have "dump schools"....they were called '600 Schools'...a reference to the pay differential for working there i believe...

and don't forget Grover Clevelands "mini-school" in the mid to late seventies...