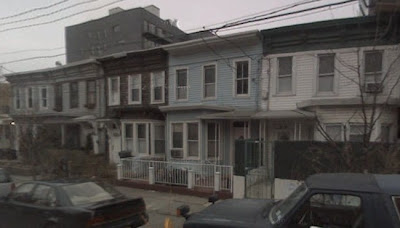 "I have been meaning to go and take pictures of this for a while and finally went. On 46th road between Vernon Blvd and 11 the Street there was this row of old wooden houses, all connected. I have often dreamed of owning one of them but the one that was for sale recently was way out of my range as is most of Hunters Point these days. They are small little houses but have lots of character. At least one still has the original scalloped shingle siding. As you can see by the attached pictures, the current owner has different plans. 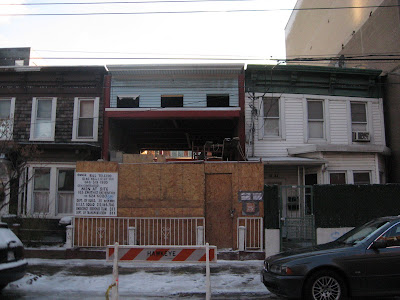 According to the Buildings Dept., there was a permit issued to add 2 stories and a 4-story rear additon. Notice where this house is related to the others. AS you can see from the picture the house has basically been demolished and a new structure is being built. This is the idiocy of the Departments of Buildings and City Planning. 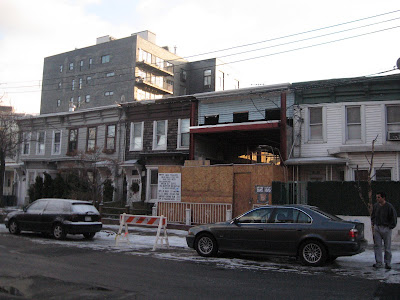 When I went to take the picture this afternoon, as I was snapping my pictures the owner of the building came out and approched me. He asked me what I thought about it and I told him that I thought is was horrible that he had done this and it was just plain greed. He got defensive and said that he was hard working person and he was doing this in a recession. He said some other stuff but I just got back in my car and left. There have been quite a few complaints but only 1 violation at this site and the adjoining neighbors have worried about their houses being affected. I will continue to take pictures as it proceeds. Thanks for giving us a place to post this kind of stuff and I hope you can use this." - Horrified in Hunters Point
Posted by Queens Crapper at 12:00 AM

I give up, I just fucking give up on this entire God damned borough!!! You builders and politicians can take your damned overdevelopment, your shitty crap condos, your Mcmansions, your high rise hotels, your overcrowded human warehouses, your filth, your stadiums, your overpriced malls, your miles of safehaven neighborhoods housing illegal aliens, and shove them all up your asses! Go fit a million more people into this borough, I was born and rasied here, and always planned to die here, but now Queens is dead to me. I have two more years in which I have to stay here for work. When my time is up, I am packing it in and getting out of Dodge. All you usual suspects, Marshall, Katz, Monseratte, Pinky, Crowley, Goia, Vallone, Bloomdouche etc, you have all done everything you can to kill Queens. I hope its spirit haunts you till the dai you die. And when that day comes, may you all die the worst horrible deaths for what you have done to this city and this borough. Goodbye, and go fuck yourselves!!!!

Why would any sensible person want to own one of those firetraps.

Stick houses are bad enough when they are detached but, those old units are disaster just waiting for someone's stupid wiring mistake, smoking in bed etc.

At the very least, don't put loved ones in a place like that.

Don't let the door hit you in the ass on your way out. Good riddance.

Don't let the door hit you in the ass on your way out. Good riddance.

Theres a total lack of respect or communication with the original residents in Hunters Point with the new rude settlers and developers.How far is that going to get these new residents in the neuvo crap condo buildings?I highly doubt the toxic cleanup to the north of where they removed the Pepsi sign is actually clean or safe.The toxic mess went on for years.

How was this job approved??!! Thats what I really want to know!
its a frame building!..what are the zoning requirements for an enlargement like this??? can we get the DOB to audit this job?!? How many reconsiderations have been granted to get this thing approved!?!?!?!

How was this job approved??!! Thats what I really want to know!
its a frame building!..what are the zoning requirements for an enlargement like this??? can we get the DOB to audit this job?!? How many reconsiderations have been granted to get this thing approved!?!?!?!

Us veterans of the wars know that the rules and regulations are no longer enforced.

We know that the politicans are involved in everything except the things needed to preserve the community (check out Team Gioia playing chess - he has 3000 signatures and $3 million dollars for this next career move - and he did jack shit for the community).

We know that the newspapers will feature press releases from the developers as news, and bolster their faultering position by taking lots of real estate ads.

But the real scorn is resereved for the community preservationists in NYC. It is controlled by those living in areas where something like this is unthinkable. They have ties to the developers - hell the developers live in their communities!

They will do nothing about this except suck all the air out of the room. Money that should go to start grassroots community groups instead will go to schools to commision yet another tiresome study on how we should live this this.

Where does it say he/she lives there? And what does this have to do with the condition of the house?

I din't realize it was against the law to own and drive a car in Hunters Point. Lord knows that are a lot more of them now. I happened to have my camera with me and be in my car enroute to another destination when I drove by and remembered that I wanted to take a picture of the house before it is totally gone. In the past when I walked by I didn't have my camera with me as I don't carry it around on a daily basis. I'll try to be walking the next time I take a picture of the building progress.

Have you seen it lately?! It got much worse. I understand the original DOB approval was for a an "addition" to the existing building, which would imply that some of the old building would survive. But they left up one wall of the old building (I assume for the purpose of inspection) and then torn it down, as well. Right now the entire old building is gone and there is a really ugly new building there. What's up with the DOB???