Property owners at Willets Point said they are readying battle plans to fight the city−approved redevelopment of the area in both the court of law and public opinion.

Leaders of Willets Point United Against Eminent Domain, a newly formed coalition of at least 22 property owners in the area, said land acquisition negotiations have dried up since the city Economic Development Corp. won a resounding victory in the Council late last year by getting plans for a $3 billion mega−project approved.

“Nobody’s heard from them. The city doesn’t believe there’s anyone else out here that can fight back, so they’re just going to try and roll over us,” said Jake Bono, of Bono Sawdust and Supply Co. “With all of these new people coming together to fight the project, it should sound an alarm for the public that something isn’t right here.”

While the city said it now controls about 60 percent of the privately owned land at Willets Point, more than 60 property owners have not agreed to deals with the city. 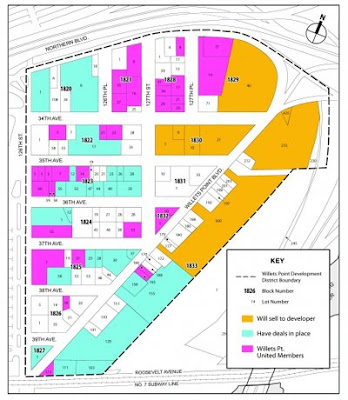 Blue means the City made a deal to buy the property before the November 13th vote. No one's been paid yet, though, and they are expected to vacate by the end of the year. TDC wants its shovels in the ground by 2010!

Remember that while your firehouses are closing, your kids' teachers are being laid off and you have fewer cops patrolling your neighborhood, the City always has enough money for ballparks, luxury hotels, yuppie condos and to line the pockets of developers.
Posted by Queens Crapper at 12:16 AM

There are almost no words to describe the lawlessness of this seizure of private property for transfer to wealthy developer cronies of Commissar death and Taxes.

If all this fuss is not important to some, then they need to remember that this Commissar has no friends, no allies, no concern for the law or civilized behavior. So, when it suits his purposes, he will take your property too.

Ha, ha, ha (JUST JOKING)
maybe hizzoner could use a good pair of Gucci concrete overshoes to aid his descent!

Good luck to those property owners. America is becoming a fascist dictatorship. Property rights mean nothing.

the battle has just begun & will go on for years , this project to someones dismay will never be built. claire shulman will never see it . on her tumbstone it will read ''WILLETS POINT NEGLECTER'' lots of people with a benfit to their own pockets love this plan -- beware they are coming for all of us

Let's go back in time:

CB#7 was a quiet player,
along with Manes and others,
that were marketing Flushing
to overseas Asian interests
during the early 1980s.

Their long term "agenda" appears to have been the curtailment of any expansion (if not the eventual removal) of the African American population that had long resided in Flushing.

They did not want the area to become (once spoken in a hush)
"a south Jamaica".

Many years later the Jackson Heights landmark district was created as an anchor with the goal of eventually gentrifying Elmhurst and Corona.

That would result in the displacement of the poorer Latino community in those areas.

H-m-m-m....I'm not one for conspiracy theories but if it quacks like a duck maybe it is one.

Imagine this folks...
a classic real estate pincer assault from the east followed by a later one from the west and people of color caught right in the middle.

And some of the local
(and not so local) pols might be
in on it!