Landlords not being held accountable 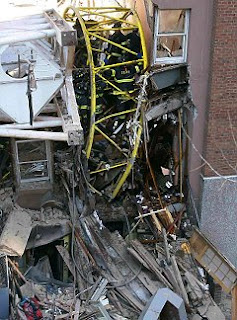 Hundreds of landlords caught permitting unsafe or illegal conditions on their properties were allowed to skip out on millions of dollars in fines, a scathing new audit claims.

The audit by city Controller William Thompson found more than 75,000 unpaid building and zoning code fines totaling roughly $202 million as of last October, including some that had been outstanding for nearly a decade.

"The city is not holding individuals and businesses liable," Thompson said in a statement. "If someone does not pay a fine and experiences no collection efforts, there is nothing to prevent ... future violations."

Thompson noted that the upper East Side construction site where a crane collapsed last March 15, killing seven people, had 21 unpaid fines even two months after the accident.
Posted by Queens Crapper at 12:23 AM

Im sure bloomie missed the company not paying fines because he was busy fixing that bloated city debt.Very observant man that little mayor.

The City should seize properties that are not paying fines promptly and consistently breaking the law such as profiteering by providing illegal housing to the public.

Big Developers dont like to pay ANYTHING. They would rather let you take them to court and then the court case will result in them paying 30-50 cents on the dollar.
It doesnt matter what the contract said.
That is really how they make there money. After they pay the lawyers - they are still ahead of the game.

The IRS is now run by a tax cheat.

In NYC, building cheats are protected by their own cheat, Commissar Death and Taxes.

Keep paying off the Commissar and the world is there for you to rape.

Remember this report when Weiner campaigns. What has he ever done to require these developers to comply and protect you and other New Yorkers?

By the way, Weiner is not really committed to running for mayor. He will stay on the congressional payroll and perform no services for those who elected him. And, even if he loses the election (he will), he stays on that payroll and continues to fail to serve.

Let him resign congress to demonstrate some commitment.

And, will Commissar Death and Taxes resign now in apology for his abject failure to manage city agencies?

My landlord has frozen me, burned me, turned off my lights, dropped the ceiling onto my living room (destroyed everything there), painted my banisters with gasoline(yes, I live around the corner from the "Father's Day fire" site where a child with gasoline killed three and injured 60). Right now, my building has no front door, not even hinges for the door. Asbestos, lead, gasoline in the sewers, nothing is too good for us paying tenants. Wait till the entire block goes up in flames.

The people
should own their own land.

Aren't the concepts of "LANDLORD" and "TENANT" Medieval?

I think that if there was more personal OWNERSHIP of property
with less RENTING and LANDLORDS
we'd all be better off
and maybe act a little more gentile towards each other too.

H-m-m-m...now if we only all had some steady decent paying jobs...h-m-m-m...and had some mortgage money made available to us from those greedy fat cat banking bastards...we'd all...well never mind...it's all beginning to sound too much like a fairy tale!

Everyone complaining about landlords, ever thought perhaps that is their livelihood? If you can't save enough to own your own place, stop crying.

If rental income is your "livelihood", you shouldn't be owning a building.