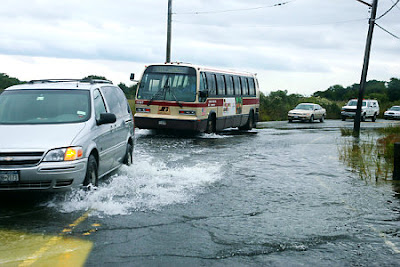 In Queens, transportation advocates and elected officials pointed to a wish list of projects sorely in need of federal funding.

“It’s not the most sexy-sounding, but it’s what we need in Queens,” he said, pointing to the borough’s scarcity of subway lines. “Residents in Queens rely on buses more so than in any other borough.”

The rail resources in Queens also need attention, Liu said. “There are dozens of subway stations and LIRR railroad stations whose maintenance has been deferred for years. Those stations need to be fixed up as quickly as possible,” he said.

Sewer upgrades also top the list for some city officials in southeastern Queens, where development is outpacing infrastructure improvements.

"The water pollution control plant [in Rockaway] needs to be updated," said Jonathan Gaska, district manager of Community Board 14, which serves the peninsula. "Our population is growing at a tremendous rate because of all the development down here."

Fear not: if we don't get money for these improvements, we won't allow that to stop us from moving forward with further overdevelopment of the borough.
Posted by Queens Crapper at 12:25 AM

1)Re-open the LIRR stations previously closed - for example the Elmhurst station. 2)Charge metro card fee to,from and within NYC to use LIRR. This would help broaden transportation options for Queens residents. Point bus routes towards these stations so that they are fully utilized and practical for residents. Eliminate bus routes extentions that have no ridership such as the Q45 extension to Atlas Mall. The route is now very slow and adds to congestion.

JFK access should cost only a metro card ride - enable residents to lower their cost to ride to the airport or airport jobs at regular rate. Encourages more ridership and reduces cab and private auto traffic to and from the airport. LGA light rail should also incorporate same service and pricing theme. High utilization will repay contruction and maintenance. No brainer.

Looks like Vernon in about 30 years after the developers have moved on.

Why don't you ask your cousin
Tommy Huang for help C.M. Liu?

what about willets point

I believe the photo is of Brookville Blvd. crossing the Idlewild wetlands between Rosedale and 5 Towns. The city should raise this road on a causeway, allowing excess rainwater to easily drain into the bay, instead of flooding the road.