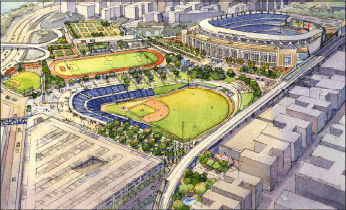 The cost of replacing more than 22 acres of South Bronx parkland displaced by the new Yankee Stadium has skyrocketed 67% to nearly $195 million, according to a new report by the Independent Budget Office.

Design revisions, project additions, unanticipated cleanup of hazardous materials and construction inflation have driven costs up by $78.6 million, the report said. While the Yankees are financing the stadium — with the help of city and state subsidies — the parks are being paid for by the city.

Funding for the increase has been built into the city’s capital budget, according Doug Turetsky, chief of staff of the IBO, a city agency that operates independent of the mayor. A spokesman for the mayor did not immediately respond to a request for comment.
Posted by Queens Crapper at 12:43 AM

Maybe the spokesman needs to respond faster with info on how the genius financial mayor is going to pull that rising price tag off without wasting tax money during a predicted coming financial crisis.Oh! thats right. The mayor is a liar so he'll just keep milking the citizens for his bad ideas. Corporate welfare subsidies is not clever.

Mayor Bloomberg
must be a Yankee/Mets fan.

He prefers spending millions
and millions of taxpayers' dollars during a faltering economy bailing
out the Yanks and backing
the City Field/Willets Point boondoggle.

But when it comes to a couple of Queen's hospitals facing a shut down, there doesn't seem to be any money left in the cookie jar!

Note:
Aren't these financially strapped medical facilities located in the less privileged areas of our borough while the hospitals in hizzoner's posh upper east side neighborhood remain open and running at full speed.

I invite all of you voters to remember this on election day
when Bloomberg, Quinn and her colleagues seek to continue
having their way with NYC!

It appears from the photo that The House That Ruth Built's foot print will be utilized as a small ball field.Much better than a parking lot on such sacred ground.